Roger Stone Puts Himself in the Middle of Trump-DeSantis Feud

Roger Stone Puts Himself in the Middle of Trump-DeSantis Feud 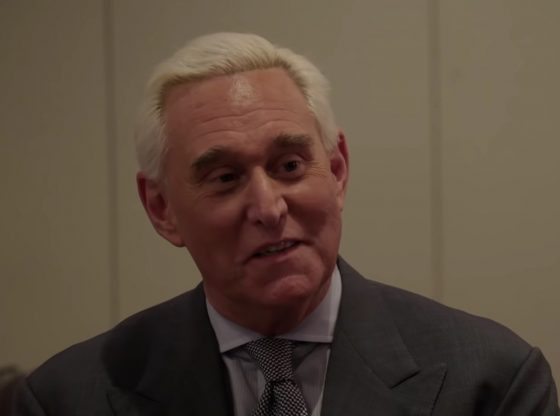 On Monday, former Trump strategist Roger Stone inserted himself into the middle of a current feud between former President Trump and Florida Governor Ron DeSantis. Stone held nothing back as he fired off an attack against the Florida Republican which could be the cause for his subsequent Twitter suspension.

And there ya go pic.twitter.com/cUx51NphcN

A feud has been brewing between Trump and DeSantis as the two have continuously traded veiled attacks on the other. According to sources close to the former president, Trump’s frustration with DeSantis has been growing because the governor has refused to pledge to step down from seeking the 2024 Republican nomination if Trump launches another campaign.

Now, both Republicans have been caught making critical remarks in interviews that many believe are targeting each other

According to American Briefing:

According to two sources close to Trump, the former president said DeSantis, “has no personal charisma and has a dull personality.”

“In the context of the 2024 election, he usually gives DeSantis a pop in the nose in the middle of that type of conversation,” said a source who recently spoke to Trump about DeSantis. (per Axios)

Previously, many guessed he was referring to DeSantis when he called politicians choosing to keep their vaccination history vague “gutless” during an OAN interview.

During an interview with Ruthless Podcast, DeSantis also reflected that Trump is at the center of one of his biggest regrets from being governor.

“One of his biggest regrets in office was not speaking out “much louder” in March 2020, when Trump advised the American public to stay home to slow the spread of the coronavirus,” DeSantis said.

I want to ask: If Trump is elected President of the USA again, why would not think the democrats and their comrades in the media would try their best to remove him again?

They will, throwing anything and everything they can against him. factual or not.

I don’t think the Democrats will be in charge. tsk tsk.

I anticipate them trying to derail any real American. They ARE the enormous enemy within. WE MUST completely drain that swamps in DC and every State and county. They will not stop until they are eradicated. Each and everyone office of every every branch down to the DMV needs a forensic audit. Subpoenas should be issued by thousands with TRUE justice and punishments. That is a humungous undertaken which will require a lot of sweat by citizens. It’s going to cost a lot but with justice, the enemy can pay. If they don’t have it, they can rebuild our roads, etc. BRING THE CHAIN GANGS BACK!!!.

There’s a fairly good possibility that the dems would get stomped really hard if they attempt to harass Trump again, with their usual fictions. But, a 2024 Trump and DeSantis, followed by a DeSantis and (whoever would be a good veep) could do the country a world of good.

John
Reply to  The Old Dog

Totally agree Trump and Desantis would be best for our country. I also would not believe anything these left wing fake news and podcasts say to cause chaos and division. My opinion is Democrats are more responsible for the Jan 6 riot at Capitol. Also, most people do not even know what a true insurrection is!
We do know that over 570 riots have occurred in Dem led cities and they incited and invited them.

When republicans take back the House in November, hopefully with a super majority, Trump will be installed as Speaker of the House. With a veto proof majority – we take back control of our country 2 years sooner!

Media platforms need to be censured. How do you suspend Roger Stones account for making an insightful and accurate observation? FB and Twitter are disgusting. When Trump launches his platform im leaving them in the dustbin of other hierarchical demagogues and tyrants. Think Nazi Germany and modern day China. When you lose your voice you lose everything. He is a small player. Welcome to Orwells 1984!

there is one way to make facebook, and twitter lose lots of money….. get away from them! if everyone quits them, where will their revenue come from?

Stone is a nut for sure but why was he suspended???

sme reason Trump and other s were suspended… they are republicans!

U two egomaniac,repukes need to quit acting like school girls, and act like adults, that will help this country out. This infighting is exactly what the dummycraps are doing to destroy their party.Wake the hell up,grow up,or neither of u will ever win again.I’m getting fed up with this bullshit like many,u need peoples vote like me.Quit the crybaby tactics, and get a life,to help all of us that are being destroyed by this walking dead zombie, pretending to be president,putting us all in the poor house.

I would like to see Trump give someone else a chance to run for President. His Secretary of State would be a great President. I read that Trump may be under investigation, I would say the Dems. are trying to find a way to stop him from running for President.

I have come to the conclusion that to be banned by social media is a compliment. A testament to the subjects truth telling and accuracy. This is why I have never bothered to subject my opinions to social media. I know I would be banned immediately so why bother with the inconvenience. I don’t trust any of the news that’s left to read on social media till I verify it from other outlets. As a great president, Ronald Reagan said, several times “Trust but verify.”

This is exactly what we do NOT need at this time. Fighting between Trump and DeSantis is the best way to assure that the democrats remain in office. EGOs on all sides need to be controlled. Insanity otherwise

I think if you look into it you’ll find that the News Media are responsable for all the Bullshit!

This whole thing is insane. Trying to create a ‘situation’ where one doesn’t exist is, no doubt, a tactic by the left to stir up trouble. We will see, as we get closer to the 2024 election, who emerges. Personally, I’d be happy with either President Trump or Gov. DeSantis. However, we have to remember that Ron DeSantis has run one state, albeit very well, while Donald Trump has run an entire country, extremely well, despite non-stop attacks from every side while doing it. Can Ron DeSantis do that?

Desantis is young. We need more than just 4 more years of Trump. We need scores of years with Patriots. 4 for Trump, 8 for DeSantis, Nunes, Cruz, …. Just give us plain ole Americans-not politicians.

Big Tech, as usual, silences anyone that they don’t agree with.

I would care less if I read in the paper big tech got hacked into oblivion.
DeSantis won’t do anything to restore history in Florida, he sure won’t take tangible action against big tech and shut down sites that censor users. Hackers are the only “check” against big tech these days.

Desantis should just take the high road on all of this stuff, between Trump looking like a petulant child and Roger Stone being his normal insane self, neither are doing Trump any good at the moment. Trump now looks like he is scared of Desantis since we are 2 years away from primary voting and he is this worried about Desantis??? If the only thing they can say about Trump is “you are a loudmouth” and you continue to be an undisciplined loudmouth then expect the same results come 2024, which is to say Trump will lose the election if he continues to bite at every opportunity. For the life of me I can’t understand why he can’t sit back and just compare his results to Biden and that be good enough, you are winning the game without having to play it, the only way you can lose is to say something stupid and The Donald can’t help himself but to say the wrong thing. HEY DUMMY, STFU and get the freaking job first, you know the one you lost to a senile old fool in Biden! How you lost it is irrelevant now, you lost, improve on your performance, look at what YOU could do better and then start doing it.

Attacking Desantis does you no good whatsoever, attack the problems, not everyone that you come into contact with. It is like Trump and Stone are trying to make Desantis the nominee because if they keep doing this act, he will be and we as Republicans won’t lose a minute’s sleep. I love Trump’s policies and I even like Trump when he pushes all the right buttons in DC and around the world, but right now he looks like a teenager in the elevator at Trump Tower pressing all the buttons for every floor, no discipline and ruining his future plans, unless that is the plan, if it is then I respect the effort to pass the torch, but I do not think he is ready to let go, so therefore he is destroying himself, on purpose, not a good look for someone that wants to be POTUS again.

Honestly, this sounds like the same kind of gossip that is popular in a junior high school. He said she said, and let’s all put our stamp on it too. Just shut up. Stone is a pot stirrer. he would have made a great “mean girl.” When the people speak for themselve, then we can start forming opinions.

And Biden is the greatest thing since Peanut Butter? Give me a Break! This is Obama’s 3rd term!

It does not matter, if it is DeSantis, Trump or a fence post, the liberal press will attack any and all conservative candidate. America is sick and tired of liberal money canceling our Constitutional Freedom style of government and save America as any and all true patriots plan to do and vote 🗳🇺🇸

DeSantis has never said he’s running for office!Don’t know what the fighting is all about!

its the News Media that starts it!

Trump is toxic. He needs to campaign for DeSantis, so we have a sure win in ’24.

Laser boresight your best Tool- put a razor sharp edge on your steel- collect and bottle as much food and water as possible ,because what is coming now is terror and pain only known before in biblical proportions/The talking is over ///it’s time to cross the Delaware George

It will not matter because if any Republican get’s into WH the swamp Democrats will attack them just like they did to Trump!
Vet

Unless there arent many Democrats in the congress!

I will be surprise if all the RINO’S don’t line up to run for president again! I love watching Romney or Obama light as he was called doesn’t try again!

Give me a break.
Lets see what happens this year with the 2022 vote.
The rate of Marxist corruption is moving so fast, who can tell about 2024?
Looks like the Jihadis are on the move again too.

This is all a huge distraction. President Trump and Ron DeSantis get on very well and neither is worried about 2024 now. Its 2020 that needs fixing. Watch the real events

I am a Trump fan but I sure wish he wouldn’t egg on DeSantis on this. DeSantis said a long time ago that if Trump ran he wouldn’t enter the race, it’s really things like this that people jump on to bad mouth him, and I just don’t want him to be on the other side of this.

who ever gets nominated for President, be it President Trump, and or Desantis, will get my vote, and it doesn’t matter which one it is!