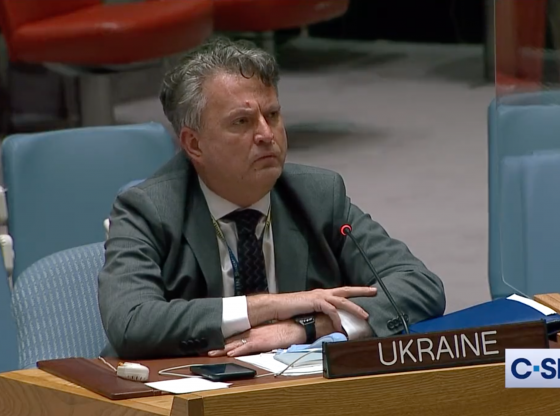 During a last-minute United Nations meeting seeking to find a solution to the Russia-Ukraine conflict, it resulted in a rare impassioned exchange between the two countries’ representatives.

Ambassador Sergiy Kyslytsya told the council, “It’s too late, my dear colleagues, to speak about de-escalation.” He added, “I call on every one of you to do everything possible to stop the war.”

Kyslytsya then specifically addressed his counterpart, Russian Ambassador Vassily Nebenzia, who was presiding over the meeting. He encouraged him to pick up the phone and call off the Russian government from invading his country

“You have a smartphone. You can call,” Kyslytsya pressed.

“I have already said all I know at this point,” Nebenzia said in response.

“There is no purgatory for war criminals. They go straight to hell, Ambassador,” the Ukrainian said.

one correction to his statement
There is no such thing as purgatory
anyone who does not know Jesus as Lord and savior is lost, period end of story

jesus is toooooo busy blessing his globalists and all their puppets; $oro$ and chester biden and demonrats and rinos and fbi CRIMINAL organization and media and altar boy raping demonrat priests .

WTH is it Russia’s biz of who is in power in Kiev? I find it hard to believe that since it is debatable that Putin intends to take Kiev as it stands today, that Russia’s ambassador is even telling the truth unless Putin plans on taking all of Ukraine and is taking back all the countries the Solviet Union lost in the cold war which under Putin has not ever ended in his mind. Unless Biden seeks to ruin the USA further, he had better get a plan together to stop him and the globalists that wish to escalate socialism worldwide.

To speak with such certainty of things you really have no way of knowing is true or not. I don’t know whether to envy you or pity you Dan

I really don’t need either from you, it’s the truth as laid out in the bible so you can take it to the bank
Maybe try reading it and you would know.

Maybe studying the bible would help instead of just reading it!

So, you’re invading my country so I will throw angry words at you. What are you planning to do with all the weapons we sent? Hope it will not be like Afghanistan.