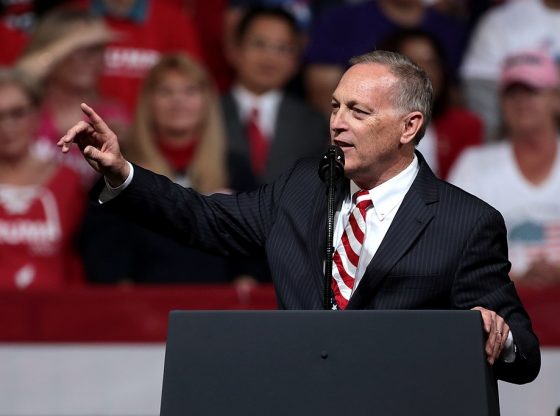 Three Arizona Republican candidates were given the green-light to remain on the 2022 ballot from the state Supreme Court after a group of voters challenged their candidacy.

The Supreme Court of Arizona ruled that Republican Congressmen Paul Gosar and Andy Biggs, along with State Representative Mark Finchem, can remain on the ballot in their respective races, after a group of Arizona voters sued to stop the Republicans from appearing on the primary ballot in Arizona’s August primary, on the grounds that the three had participated in an insurrection in violation of the 14th amendment’s disqualification clause. Gosar and Biggs are incumbents running for re-election in their congressional districts, while Finchem is running to become the Arizona Secretary of State.

According to the ruling, the plaintiffs alleged that the three Republicans were ineligible to run for office because of their alleged involvement in the events surrounding the Capitol riot on January 6, 2021. The plaintiffs argued that all three “engaged in acts that amounted to an insurrection or rebellion under Section 3” of the 14th amendment to the Constitution, which specifically prohibits individuals from holding any state or local office who participate in an insurrection against the United States, commonly known as the “Disqualification Clause”:

No person shall be a Senator or Representative in Congress, or elector of President and Vice-President, or hold any office, civil or military, under the United States, or under any State, who, having previously taken an oath, as a member of Congress, or as an officer of the United States, or as a member of any State legislature, or as an executive or judicial officer of any State, to support the Constitution of the United States, shall have engaged in insurrection or rebellion against the same, or given aid or comfort to the enemies thereof. But Congress may by a vote of two-thirds of each House, remove such disability.

The case originated in the Maricopa County Superior Court, which ruled in favor of the three candidates. The Superior Court ruled that: Congress did not establish a private right of action to enforce the Disqualification Clause, neither does the criminal statute outlawing insurrection and rebellion; the Arizona state law governing election challenges similarly does not provide for private right of action, and; the Constitution only gives Congress the authority to determine qualifications for holding office, among other rulings. The Supreme Court agreed with the lower court’s findings, noting that Section 5 of the 14th Amendment expressly delegates the authority on whether and how to enforce the Disqualification Clause to Congress. The Court also ruled that a state-level election challenge is not the proper way to enact a Disqualification Clause challenge, and out of the scope of Arizona law. The Court thus upheld the lower Court ruling; all three candidates will appear on the ballot for the August primary.

Rep. Gosar praised the ruling on Twitter, “The Democrats lose again and now have to try to beat us at the ballot box.”

Breaking: The AZ Supreme Court just ruled that me, @RepAndyBiggsAZ and @RealMarkFinchem will remain on the ballot. The Democrats lose again and now have to try to beat us at the ballot box.
✔️Free Speech Wins
✔️No “Insurrection” no Disqualification Clause pic.twitter.com/Ct3RvtekSu

The stupid ass democrats are going to lose every fight having to do with the Jan 6th demonstration because the stupid capitol cops lets the protestors in and NOBODY tried to stop them. They even assisted them. There are videos everywhere that show it!!!

Let these demorats eat the cost of this litigation. had they read and chew on the Constitution on qualification for seeking public office, these morons would not even dare to bring these false accusations. send them the legal bills or counter-sue for defamation. let’s see now, if these demorats are holding potus and vp positions by fraud, what will prevent WE THE PEOPLE from eradicating them from this society? you notice i use lower case on potus and vp bc none of them is the legitimate official elected. they stole the 2020 election outside the US Constitution by-law. when you see bank robbers escaping from a bank holdup, what should the good citizen with conceal carry do, kill them? what is the difference between the bank robbers and the criminal potus and vp officials robbing Fort Knox of WE THE PEOPLE gold reserve? they should be hunted down and eliminated!!!