On Wednesday, a federal judge released former President Trump from a civil contempt finding. However, Trump was ordered to pay $110,000 in fines for failing to comply with a subpoena to turn over several financial documents to state Attorney General Letitia James.

Judge Arthur Engeron said the contempt charge would be lifted only if certain conditions are met – including that the former president’s team provides the court with a description of the Trump Organization’s document retention and destruction policy and reviewing the remaining five boxes tied to Trump at an off-storage facility by May 20, according to CNN.

Engeron agreed that Trump could place the $110,00 fine in an escrow account until his appeal of the contempt ruling is completed.

Engeron had issued the contempt finding on April 25 and slapped the former president with a $10,000 a day fine for every day he held out financial documents from James’ investigation into whether the Trump Organization, the former president’s real estate empire, misstated the values of its real estate properties to obtain favorable loans and tax deductions.

Engeron stopped the clock on the daily fine on Friday when Trump’s attorney submitted sworn statements about his efforts to comply with the attorney general’s subpoena.

If Trump fails to comply with the fee, Engeron said he will bring back the contempt finding.

Quit over burdening our courts with all these witch hunts.

Can anyone imagine what it would be like if our justice system treated Democrats the same way they treat Republicans and Conservatives?

no kidding. look at hilary. deleting her emails. destroying computers and blackberrys. data was “bleached” from those not destroyed.

Funny how the corrupt court never did that to Hillary! And they want you to believe how honest they are! Never even done it to Dominion! Funny how they forget to do this to Democrats! They will keep making these corrupt rulings till the people come after them! I remember they didn’t do anything to Schumer when he threatened the courts ! They just looked the other way. And they tell you they are honest!

Stupid case…it’s the banks & property valuers that do the actual valuations, not the loan applicant…no wonder ppl are leaving these lib-turd-run, crime-infested, $#!+-holes❗️

Anyone read the 7th amendment? Trump could certainly use that right now. Now, who is the real tiger, the judge or Trump? 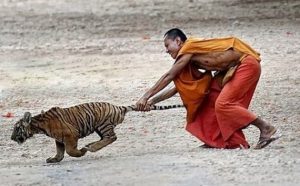 While this judge is diddling away at harassing Trump, Biden is cheerily blundering along stealing absolute billions in grift while he destroys America, Antifa and BLM run rampant because the courts are scared s**tless of them. But yes, we will continue persecuting the only man who can save the USof A.