Amid Unverified Allegations – Herschel Walker Within 3.8 Points Of Warnock

Amid Unverified Allegations – Herschel Walker Within 3.8 Points Of Warnock

Amid unproven allegations that come *conveniently* a month before the Herschel Walkers Georgia Senate race in the 2022 Midterm elections, Walker doesn’t seem to be stumbling in the pools – according to most.

Herschel Walker is challenging incumbent Sen. Raphael Warnock, and the polls are neck-and-neck.

Walker maintains that the allegations against him are “a flat-out lie” and said that he will be filing a defamation lawsuit against The Daily Beast. Former President Donald Trump defended Herschel Walker, with Trump saying on his Truth Social, “… Herschel has properly denied the charges against him, and I have no doubt he is correct.”

According to Real Clear Politics: 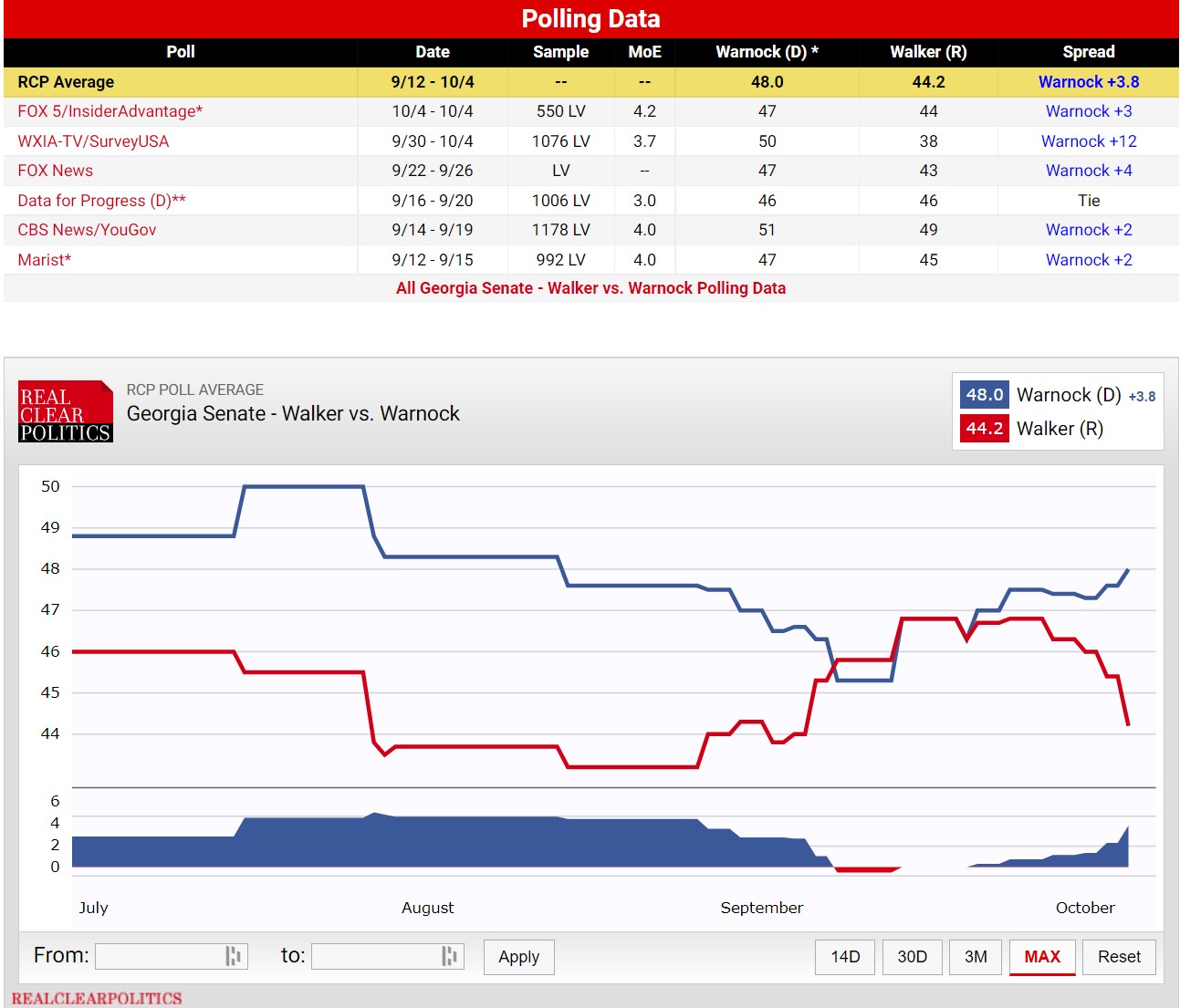 Headlines have been coming out within the past day due in large part to the WXIA-TV/SurveyUSA poll, which shows Warnock leading by 12 points. 12 points is a very tough lead to beat, especially only a month out from elections – however, they’re alone in their polling numbers. While most polls are showing Warnock leading by no more than 4 points, a 12-point lead is an outlier that would typically be scrapped. WXIA-TV, commonly known as “11 Alive” since the 1970s, is an NBC-owned television station based out of Atalanta, Georgia. While WXIA-TV’s location is not necessarily indicative of their political affiliation, Atlanta, Georgia is the largest left-leaning area in Georgia. Along with this, NBC and its affiliates are often left-leaning, this can include their local news as well as MSNBC.

Left-wing publications are utilizing the outlier data, and running articles showing Warnock’s apparent 12-point lead. They are in all likelihood well aware that the polling is an outlier that should be scrapped, however, they’re pushing articles to keep Herschel Walker’s controversies in the news for longer, along with this, one likely inaccurate poll gives left-wing sources the ability to exaggerate how people from Georgia are responding to the controversy.

One of the left-leaning publications pushing the WXIA-TV poll is Bloomberg, which mainly utilized the WXIA-TV poll, and widely discounted other polls showing a narrower gap between the two candidates.

According to Real Clear Politics, the allegations have lost Walker no more than 2-3% support. While losing support is not ideal, 2-3% is a far cry from Warnock waking up to a 12-point lead.

All the Best Reactions to News Hunter Biden Could Finally go to Prison
Confirmed: Communist China Has Infiltrated American Elections