No Worries For the Economy, Biden Has Ice Cream Instead

Home /NEWS/No Worries For the Economy, Biden Has Ice Cream Instead

No Worries For the Economy, Biden Has Ice Cream Instead 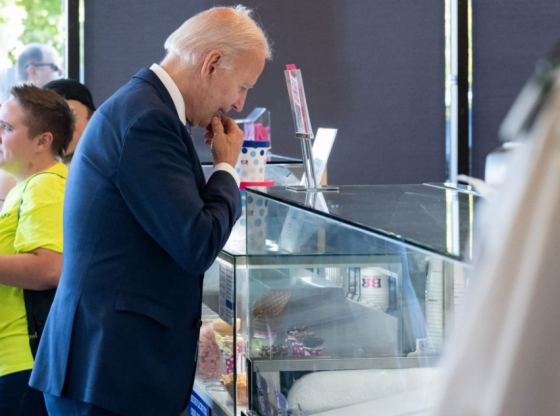 Biden falsely boasted the economy while eating an ice cream cone in Oregon Saturday. During a stop at Baskin-Robbins ice cream shop in Portland Oregon, where he has been campaigning for Tina Kotek, he mentioned that the “economy is strong as hell — the internals of it”. Despite inflation, higher gas prices, and a recession, the President happily discussed his optimism while eating his ice cream cone.

Biden acknowledged the existence of an inflation, though he falsely mentioned that it was worse everywhere else in the world. In a Pew Research Center analysis conducted in June, inflation in the United States is worse than it is in many other major countries. This includes close by Canada and Mexico, and the United Kingdom, Germany, France, and China. Other questions revolving around inflation and the strength of a dollar were dismissed instantly by Biden as he mentioned he wasn’t concerned.

He threw the blame for our country’s issues onto other countries. According to BREITBART he said:

“The problem is the lack of economic growth and sound policy in other countries, not so much ours,” he said. “And that’s having, it’s worldwide inflation, and it’s consequential.”

Biden then went on to discuss Kotek’s campaign mentioning that she will win. He said that he is certain when the people come out to vote she will win. This comes just a day after Drazan, the Republican candidate in the race, was leading the polls in the state.

It seems as though Biden was more concerned with picking ice cream flavors than with the rising issues our country is facing with the economy and inflation.

He should keep his mouth closed when he’s chewing. No manners and liar

Folksy Joey is a zombie.