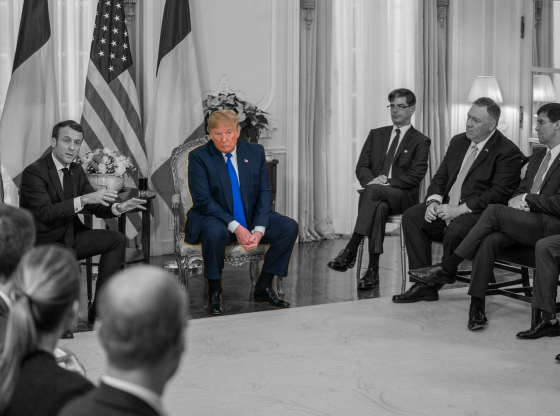 | By: Deroy Murdock| NEWS | 946 | 0 comments
Advertisement
Do you Approve of Trump’s COVID-19 Response? [TAKE THE SURVEY]

NEW YORK — Does Olivia Nuzzi use a time warp to commute to and from her own moral universe?

The New York magazine writer’s ethical home base must be, as Stevie Wonder once sang, 10 zillion light-years away. This would explain the question that she posed Monday to President Donald J. Trump.

During a Rose Garden press briefing on COVID-19, she asked America’s Commander-in-Chief:

“If an American president loses more Americans over the course of six weeks than died in the entirety of the Vietnam War, does he deserve to be reelected?”

This question is morally depraved on multiple levels.

First, Americans still debate whether the Vietnam War was a noble effort to save a small, independent nation from metastatic Communism or a pointless, remote quagmire in which this nation had no business. But hawks and doves agree on this: America inserted GIs into that conflict. They arrived in planes, sailed in on boats, and landed in their boots via parachutes. For good or ill, 58,220 uniformed Americans died in Vietnam because the United States government sent them there.

Au contraire, conversely, and 180 degrees in the opposite direction, America did not storm the beaches of COVID-19. President Trump did not dispatch the United States Armed Forces to China, to combat the Wuhan Virus. The president did not order Americans to visit their local airports, greet incoming passengers from Wuhan, and welcome them to the USA with long, slow, deep French kisses. Trump did not instruct the Commerce Department to import giant vats of bat soup and invite Americans to savor it as a mouthwatering symbol of his beautiful, very special trade agreement with Chinese Communist Party boss Xi Jinping.

Offices and work sites were full each morning, as hundreds of millions of happy people generated high-quality goods and services.

Stores were busy every evening, as Americans on their way home used their hard-earned wages to buy products to make their lives more rich and rewarding.

Restaurants and bars were packed, night after night, as Americans celebrated their good fortune. Seemingly anyone and everyone who wished to share in this bounty did so, as friends, neighbors, and total strangers cheered them on.

And then, like a silent, invisible Blitzkrieg, COVID-19 attacked. Without troops on the march or tanks on the move, this brand-new virus invaded, killed 60,966 Americans (and counting), and brought Earth’s most powerful economy to its knees.

Today’s calamity and the Vietnam War are as distant as Nuzzi’s Rose Garden chair is from the moral black hole from which her question escaped.

Second, why would Nuzzi wait until COVID-19’s death toll approximated that of America’s in Vietnam before so querying Trump?

Why didn’t she ask the President any of these questions, throughout this pandemic?

•“If an American president loses more Americans over the course of 12 days than died in the 1906 San Francisco earthquake, does he deserve to be reelected?”

•“If an American president loses more Americans over the course of 19 days than died in the 1900 Galveston, Texas hurricane, does he deserve to be reelected?”

•“If an American president loses more Americans over the course of three weeks than died in the entirety of the War of 1812, does he deserve to be reelected?”

Third, and ugliest of all, Nuzzi did not ask about the 1906 quake or the War of 1812 because only two Americans survive who lived through the former (South Carolina’s Hester Ford and North Dakota’s Iris Westman, both age 114), and anyone who experienced the latter is long, long gone. However, tens of thousands of Americans are totally vertical who fought in Vietnam. Millions more Americans buried best friends, brothers, sons, lovers, fiancés, and husbands who returned from Vietnam totally horizontal. Additional millions took to the streets for and against this conflict, debated its pros and cons around lunch counters and dinner tables, and cast boxes and boxes and boxes of ballots based on U.S. conduct in that conflagration.

Many Americans are too young even to recall, as little boys and girls, when church bells chimed the day the Paris Peace Accords were signed in 1973. Many Americans likewise are too young to remember watching their TVs in horror as helicopters whisked evacuees out of a collapsing Saigon in 1975, unloaded them on nearby U.S. aircraft carriers, and soon were shoved overboard, to clear the decks for more choppers full of escapees.

Even for such younger people, with not even a televised connection to the Vietnam War, those words still have meaning, thanks to scores of films, TV specials, songs, and other cultural offerings — from the haunting epic Apocalypse Now, to the bittersweet comedy-drama Good Morning, Vietnam, to the spellbinding documentary Last Days in Vietnam.

The words “Vietnam War” elicit an emotional response in almost every American adult. And that is precisely why Nuzzi asked her question: To stir, inflame, and abuse the emotions of the American people as if enduring a global plague and a national emergency were not emotionally draining enough. Rather than use her journalistic skills to help defeat this invisible enemy, Nuzzi asked one of the most divisive questions imaginable. Why foil deadly microbes when one can rip open societal scars and stuff them with rock salt and hot sauce?