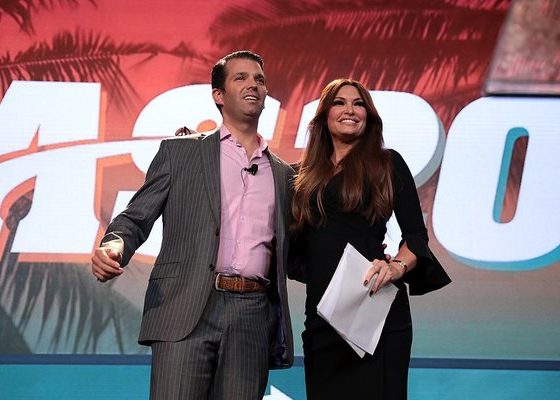 The campaign did make it clear that neither she nor Don Jr. traveled on Air Force One with the President.

Kimberly Guilfoyle, a senior adviser to the Trump 2020 Campaign and girlfriend of Donald Trump Jr., has tested positive for the coronavirus, the campaign confirmed Friday night.

“After testing positive, Kimberly was immediately isolated to limit any exposure. She’s doing well, and will be retested to ensure the diagnosis is correct since she’s asymptomatic, but as a precaution will cancel all upcoming events,” Sergio Gor, chief of staff of the Trump Victory Finance Committee, told Fox News.

“Donald Trump Jr. was tested negative but as a precaution is also self-isolating and is canceling all public events,” Gor added.

The testing occurred in South Dakota, where Guilfoyle and Trump Jr. had traveled to attend President Trump’s speech at Mount Rushmore, according to The New York Times.

Guilfoyle was not experiencing symptoms but was tested as a precaution. The White House stated that people in close proximity to the President including President Trump undergo frequent precautionary testing,

I wondered where 2 of his biggest supporters were.

i wish they would just say everyone has it; so we can just deal with it; just dont make sense; we all know it is coming our way no mater what we do; people r catching this thing even if they r not around people; so how r they get it if they r not around anyone; hummmmm; air born is what i would say; maybe the chemicals in the plains that seems to drop out of the sky from the plains everyday of the week; they have been spray more of this stuff in the air in the past 3 years; i would not be surprised if this thing we have is from within; and not from china;

Well, thank a god of you choice she doesn’t wear a stupid mask around people she cares about, or their extended family. Wearing a mask will kill you, am I right or am I right?

Chemicals in the plains, you say?

Exactly! President Trump should just go to her and have her cough on him for an hour or so, just so he can get it so he can just deal with it.

Well, thank a god of you choice she doesn’t wear a stupid mask around people she cares about, or their extended family. Wearing a mask will kill you, am I right or am I right?