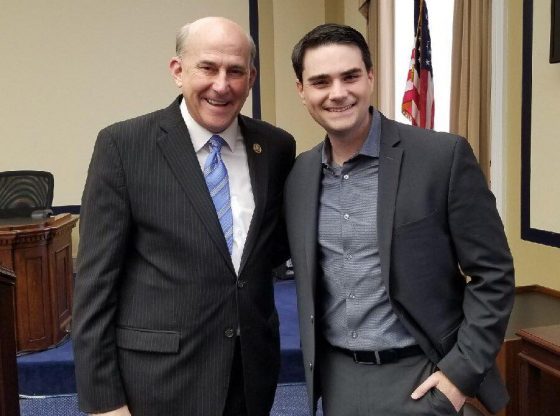 The legislation calls for the ban of all organizations or political groups that have historically supported either the Confederacy or slavery.

Rep. Louie Gohmert (R-Texas) introduced a House resolution Thursday calling on lawmakers to ban organizations or political groups that have historically supported the Confederacy or slavery in the U.S., a list he said includes the Democratic Party.

“A great portion of the history of the Democratic Party is filled with racism and hatred. Since people are demanding we rid ourselves of the entities, symbols, and reminders of the repugnant aspects of our past, then the time has come for Democrats to acknowledge their party’s loathsome and bigoted past, and consider changing their party name to something that isn’t so blatantly and offensively tied to slavery, Jim Crow, discrimination, and the Ku Klux Klan,” Gohmert said in a statement.

The vote followed weeks of nationwide protests against racial inequality and police brutality sparked by the killing of George Floyd. Protests and demonstrations have targeted statues of Confederate leaders, explorer Christopher Columbus, former President Andrew Jackson and others.

Poll: Only 4% of Americans…

Perfect, I say ‘go with vigor”.

Like the judge always says on Law and Order, “Counselor you opened that line of reasoning,…” and so have the Lefties/Progressives with their hypocritical desire to remove all things hstorical that do not blend with their current world view. A ban on the Democrat Party would fit perfectly!

What a great idea.

There have been many times when I found the Democratic party irritating but it never occured to me that it should be banned! This is supposedly because of supporting Confederacy or slavery in the US? Aren’t we a little past all that?
It’s my feelling that this might be a bad joke but if not, I think that we should leave the Democratic party to carry on!

Wow you really are ignorant of the party of slavery aren’t you. Get yourself educated and learn how the party of hate has always wanted to keep minorities down to use as slaves still. Democrats are mentally ill.

Way to GO, Louie! They’re trying to destroy our country, just because they hate our God chosen President. We can’t let them get away with that!

Irritating!? They are criminals! Most of them hate God, Republicans, Conservatives, White men, our President, and worst of all, they hate America. They are the single worst enemy we have, and they hate us enough to kill us. Don’t turn your back on them if you’re a Republican or a supporter of Pres. Trump

I don’t think you are a dumb person Frances but mightily uninformed, do not use Google but perhaps Bing or any if the other search engines to research what the Democrat party has done in the past, what they stand for and what their agenda is now. It is not hard to do but will take a little time.
Ask yourself who supports that party, follow the money trail and it will be clear to you, it you have an open mind that is.
Study the statements made by various high up Congress persons and Senators regarding our Constitution and our laws, then watch their actions and behavior, do you approve if the 3 1/2 years of wasted time and our taxpayer money for the failed Mueller investigation and then the mess they made on the fake impeachment,.
Ask yourself, during this time what did the Democrat Party actually accomplish? They did nothing but President Trump did, jobs have returned from foreign countries, our border is much safer, we now have lower pharmaceutical drug prices, regulations have been cut tremendously so that our economy grew. These are only a few examples the Trump republicans accomplished during these mean times.

Doesn’t seem the Democratic party is past anything. They are the Brainchild of the KKK along with being against the ending of Slavery. That is how the Civil War came about. The North,abolish Slavery vs The South, Keep the Slaves in bondage. Wake up America!!

“Aren’t we a little past all that” The democrats must keep the race card front and center today. It is their life line. The blacks,hispanics, and poor people are pawns for the democrat party. The democrat party use them to get in power and keep it. The democrat party loss the black vote in 1965 so they changed sides and became the friend of the blacks. But not in a good way however, they now get them on welfare and keep them there with no hope of getting off. Now if you (blacks) get off welfare and become successful you are no longer black but a Uncle Tom. My proof is what Joe Biden say to a black man, “if you don’t vote for me your not black”

“Aren’t we a little past all that?”
That’s the whole point is it not? Democrats are far from past pointing fingers at imagined enemies past and present when they themselves are the enemy. It’s not a “bad joke”. It’s a perfect poignant message to the masses, now officially documented in the annals of the library of Congress.

Give them HELL Louie, You are a great congressman. Louie please keep up the good work. I wish we had half as good congresspeople from California as you are representing Texas.

Outstanding, Louie. Like tying a can to a dog’s tail. Great stuff from Texas.

Rep. Louie Gohmert is a genius and should be nominated for the Nobel Peace Prize. His mind cuts to the heart of the matter like a laser. I look forward to the full implementation of his groundbreaking resolution and should be brought to the desk of the President promptly for his signature and for all the people of the United States.

It hasn’t been the democrat party for a long time…it’s the socialist communist party.

It has been that since before the Civil War, which was fought over the fact that the Southern Democrats did NOT want to give up their slaves. Same now, really, the slaves in China that work for Globalists, and those of US who have been made into “wage slaves” for a long time now. They have been the same for all of our nation’s history, they are trying to destroy their OWN history, so that we don’t remember THEIR perfidy.

Past support for slavery? It should read continued support for slavery. The Democrat party wants to keep as many people dependent on government for as much as possible. They call it “help” but it is SLAVERY! I am all for giving people a hand up, not a hand out.

It would serve them well to be hoist upon their OWN petard. These are the things they claim of Trump and the Republicans, if they are sufficient reason, the recorded HISTORY of the Democrats since their INCEPTION should be morte than adequate reason to cancel their “culture” OUT. A fitting end for a team of anti-American CRIMINALS that follow the Globalist plans to destroy this great nation, along with the REST OF THE WORLD also — and to kill close to 95% of Humanity, just as the Globalists have published in their plans for us, and the way to do it is this fake “pandemic” and the UN taking down all governments of all the States in the world. Hidden in plain sight, they have published their plans starting around 1928….

Hmmm . . . why am I not laughing. This is good and proper and should make every headline – now that would be a laugh.
In reality, the Democrat party should be banned for their “loathsome and bigoted” present which seems to get worse every day.
Based on their present activities: slandering our President, Constitution, and Flag; burning our cities and trampling on American citizens rights; and murdering 60,000,000 babies, the Democrat Party has proven to be DOMESTIC TERRORISTS. They should be labeled as such and their funding confiscated, the same as drug syndicates, ISIS, and MS-13, which they also support.
This is why we have the problems America is now enduring, we continue to try and put lipstick on a pig – or in this case on the devil.

Love the idea of banning the dems for their past support of slavery!

When any Party is anti-American, this Party is a traitor to our US Constitutional Republic. Socialism is ANTI-AMERICAN. Do Blacks in America ever open a history book? Did Martin Luther King die struggling to get Blacks in America equal rights for Blacks in America? YES, HE DID; but isn’t anyone forgetting the fact that the Southern States wanted Blacks in America”put in their place”. The fact that Backs in America want to support the Democrat Party is beyond my reasoning. I know that the Democrat Party has always been seen as the Party of Labor, but is this enough for Backs in America? Or any minorities? Minorities have been abused for centuries in America. From the moments before the US became a sovereign nation. This is not the fault of the citizens, it is the fault of government. Government required Treaties to Native American to make them prisoners on their own land. Government may have fought a bloody Civil War , but nothing really changed. Slaves may have their freedom, but because they were uneducated they returned to their former owners to work for slave wages. These former slave owners were the Democrats in America who died to keep slavery. As long as these Blacks in America stay uneducated they will always remain dependent of government for support; thus they became Political Slaves. This is not fiction, it is pure FACT. Was a Welfare Check enough to give up their freedom? Who is keeping Black Americans and other minorities uneducated because they can not get a good education? Democratic run Teacher’s labor unions. Every US Citizen, regardless of their race, should get a proper education. A good education is necessary for a good paying job to take them out of poverty. Yes, there is racism in America, but it is not because of White Americans. All the Major Cities in America are ran by Democrats. If these Democrats wanted to have better education offered in their cities they would have made it happen. It all means follow the money. If States have large populations the more Government Money they get from the Federal Government. New York and California are to prime examples of this Federal Funding. Democrat Party members can always claim White Privilege for the problems in their States, but the truth is that these States benefit from keeping their residents uneducated for their vote. Their vote keeps them uneducated Political Slaves. What will it take to actually follow the US Constitution and it’s Rule of Law that benefits ALL AMERICANS? Stop all this Political Correct BS or watch our cities burnt to the ground. If citizens want Law and Order, they must demand government officials give it to them. Innocents will continue to die and lose their homes and businesses if we do not return to RULE OF LAW.