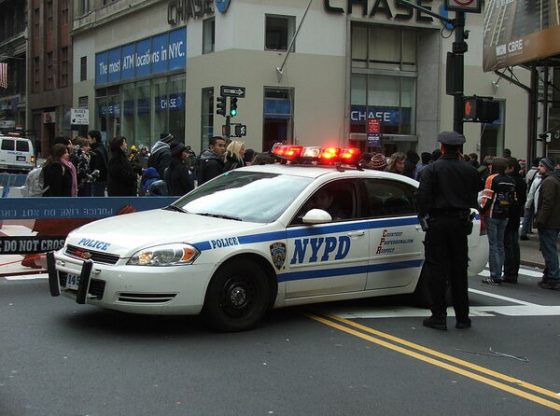 According to NY1, the President of the Police Benevolent Union Pat Lynch told President Trump during an event in Bedminster, NJ that “Mr. President, we’re fighting for our lives out there.”

“We don’t want this to spread to the rest of the country.”, he continued. “We need your strong voice across the country to say we have the support of law enforcement across this country.”

President Trump told the group that no one will be safe in Biden’s America and that he intends to increase funding for police departments across the country.

This endorsement comes on the heels of escalated violence in New York City which we covered yesterday:

Over the last 72 hours, 49 people were shot in New York City. Six of those victims died.

According to the Washington Examiner, that is 5 times more people shot in NYC than the same weekend last year.

Now, President Trump is warning New York City Mayor and failed presidential candidate Bill de Blasio that is he will step in if nothing is done about the uptick in violent crime.

There has a 30% increase in murders in New York City in June year over year and people continue to flee Manhattan at a high rate.

The police union’s endorsement of Trump has enraged local democrats.

New York Congresswoman Alexandria Ocasio-Cortez attacked the police over their endorsement, “NYPD union endorsed Trump. I’m sure this is part of their neighborhood outreach plan.”

READ NEXT: Former MSNBC Employee EXPOSES What Happens On the Inside. Will You Believe It?! [CLICK HERE]

Advertisement
HELP: Sign CDP's Letter to Facebook [ACT NOW]
Here is What You Need To Know About The Mail-In Voting Conspiracy Theory
These Four Republicans Took the Stage for Biden Last Night

Good for the NYPD Union, DeBlasio is a socialist, a failure and fraud. The NYC people elected him, they deserve him.

De Blasio (real name is Warren Wilhelm Jr.) couldn’t even make it to the Dim primaries as a presidential candidate. So now he wants to be a little dictator as he takes over NYC one block at a time. It’s time for him to go…… NOW! And he can take Ocrazyo-Cortex with him.

They’ll both get re-elected … their constituents are too stupid to vote for anyone else.

NYC used to be a destination!! A place where you wanted to go see and enjoy.. not now!!
If anyone is considering a vacation or visiting the place, you better think again. Same for Seattle! Maybe when they get smart and vote those democrat/socialist/communist out of office. And that’s a big maybe.

You can bet the Dims will all be cheating like mad come November. They know they can’t stay in office any other way.

San Francisco used to be a tourist attraction also. Its a dump and smells as bad. Homeless all over just like LA. We have been trying to get rid of newscum, he is the pits. I thought mooney was bad the 1st time then the 2nd time was worse. Then along comes newscum never saw a commercial or poster for a campaign. Like also was the rotten 4 choice him and our votes do not matter. And with illegals and the x on drivers license we keep getting over ruled. WHICH is exactly what the dirty 4 like to have in place someone they have trained to do their bidding! And folks blame the PEOPLE OF CA? Wonder why newscum gives illegals much, and to hell with our own people, now you know! Pray real hard OUR president gets all illegals OUT!

Without law and order the greatest country in the World would become just another banana republic. God bless America and God bless POTUS. KAG 2020!

All the left are liars. That is the reason Kamala was chosen because she is an excellent liar. They have lied from the time of lenin, stalin, hitler, hillary, pelosi, shumer, bernie, and joe biden doing the biding. Joe was known as the little cheater in school. The left knows one of their own. The lying left — right or left they lie for government control versus freedom and liberty. They know one of their own.

I know how the police feel, working tight schedules, long hours and very little help. As a retired military, the same thing happened to us under the Obama administration. The military got depleted, and our overseas tours, especially to Iraq, and Afghanistan were back to back. Home in the US was no different, our units became very small, duties and responsibilities mounted to those very few. Never defund or deplete the people who protect us, because they are willing to volunteer their life’s time to keep us safe. To all the people in blue thank you. Take care and God bless you. Keep America safe. Trump 2020.

Thank you for your service! My grandson went to Afghanistan just as you said~~ back to back. Thank God Pres. Trump loves America and loves the military. You veterans and active military are the real heroes!

God bless our Policeman and all the people who are there to keep our freedoms and our country safe. I thank all policeman and our president Trump. Police please stay local. We love you!

Interesting how all this violence, chaos, and defunding the police are happening in places that are democrat majority. Yet some ppl still think a Democrat president is a great idea to run the country? TRUMP 2020 snitches!!!!

The two incompetent,radical,liberal, politcians, running N.Y. dumb and dumber, need to be recalled, arrested and held accountable, for not doing their job, and causing deaths and destruction of property,and lives. U voted these idiots,in, it’s time to vote them out before N.Y. can’t be repaired, or fixed.

BUT I heard the other night where they blame Trump. A few months ago he was getting what they claimed they needed. He got it. then instead of using the ship and all the extra beds and machines needed, the A/H sent the seniors back into the homes and spread it and far to many died. Course now its all OUR Presidents fault! How many empty beds were open on the ship and other hospital setups were left empty! This is bloomies and cuomo s fault they should have had a supply which had dwindled and they knew it. Had so many that Trump sent some to other countries to help them. Do the fake news ever tell GOOD things about OUR President? I lived thru riots and wars, and listen to Pearl Harbor being bombed. Never thought I’d see this crap in our country!

I dont understand why educated grown ups dont have any common sense. There is no point in having an education or being well educated and having no common sense. I thought America has laws against Americans being traitors and committing treason.

I doubt that either looney AOC or William wilhelm (aka de Blasio) are surprised nor bothered by this.
NY voters automatically vote for every democrat…. it’s what they do.

De Blah-blah-blah is just a pawn for the Dem-Unists Party … He ranks as one of the BIGGEST FAILURES in NY Government! NYPD Blue Union know who is on their side. Our President will support them and every other Police Union because he KNOWS what putting your life on the line means! GO-NYPD Blue!!!
Oh … and Occie-Wookie – JUST GO AWAY!!!

Really, no one can question it took a brave group of law enforcement to endorse Trump and seek help for all law enforcement under attack by the violent savage communist that took over the planned peaceful protest of George Floyd’s death in police custody. The Democratic Party and their 98% propaganda media, press, magazines, radio hosts, and leftest tv hosts took the side of the night fall terrorist. The cops caught in the middle, the laughable FBI taking a knee with BLM while still still trying to obstruct exposure of their corruption in helping Obama break the law as his assistants in the first failed coup. Across America our brave police murdered, injuries for life, and befriended by the same cities they risked their lives to protect. Never in our history has a political on purpose used terrorism against on purpose our own people till now. Never has a political party labeled terrorist burning, looting, and killing as peaceful protestors. The democrats would kill the innocent and allow the defenseless to live in endless terror to gain the White House and control of congress to force near communism upon us.

Its part of their personal and neighborhood SURVIVAL plan, O’crazio.
I would ask “won’t you ever get it?” But you do get it, don’t you? In fact your engineered downfall of America is unfolding exactly as planned, isn’t it? Except for one big road block – President Donald Trump. Now if you can just rig the election to get rid of him, you and Sandinista Wilhelm DeBlasio can lead us into civil war. But what you are apparently too arrogant to get is that people like you often don’t survive your own evil uprising.

I watched Joe, he is promising everything Trump has already accomplished? Kamila is lying through her teeth, Mrs Obama lied so much it was sickening, she blames Trump for the virus and unemployment, so tired of all her lies, Trump caging kids, it was her hubby that did that, poor black floyed being shot, but no mention of all the cops being shot and killed,and all the story telling from the Dems, But the Dems never once mentioned all the kids that are shot, all the people being shot in democrat cities by Antifa and BLM that the dems support? The dems are desperate, this is their last chance, so blame Trump for everything.

[…] Just last month, Trump received the endorsement of the New York City police union which you can read more about by clicking here. […]