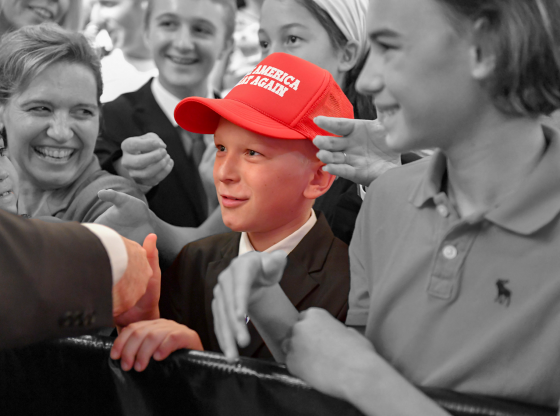 NOTE: The child in the picture is not the one who was attacked.

Two Biden supporters were caught on camera physically attacking a woman after they stole her 7-year-old son’s MAGA hat.

Abbey Wigton and her son Riley were about to have dinner at a restaurant across the street from where the DNC convention was being held, when two dems began tearing up her paper signs.

Moments ago outside of the DNC convention, Joe Biden supporters attacked a 7 year-old boy.

He was attacked simply because he wore a @realDonaldTrump hat.

His name is Riley.
Watch it happen.
Listen to him cry.

Will Joe condemn this violence against Children?

Wigton catches the Democrats as they tear up signs and throw the pieces at her, while she tells them what they were doing was a felony. Abbey’s son Riley can be seen sitting on the sidewalk as one woman encourages the other to steal the boy’s hat.

After seeing the video, Trump Jr. retweets it with a call for help to find the victims.

Joe Biden supporters stole Riley’s hat, ripped up his sign & made him cry.
Watch. It’s on video. This is sick.

The boy yells as he bravely chases after the women, “That’s somebody else’s hat.” The women tell him, “We don’t give a f**k, your mom likes Trump.”

Here are photos of the victims.

Mother, Abbey and her son Riley.

They were just waiting for a table at a restaurant across from the DNC convention when the attack happened.

If Joe Biden supporters will do this to children — what will they do you you?

Riley trails after the woman, identified as 21-year-old Camryn Amy, in distress, asking his mother to call the authorities. Abbey tells the women she’s going to follow behind to their car to get the license plate.  Amy replies: “Then I’m walking.”

The mother has filed a police report for assault with the Wilmington Delaware Police, if you have any information, please call them: (302) 576-3990

When Riley makes a grab for the hat, which has fallen to the ground, Amy kicks at him.

A concerned Twitter user asks the president to send Riley a new hat.

Mr. President,
Can you get this young man a new MAGA hat? https://t.co/7uUG91dYvW

The second woman, identified as 21-year-old Olivia Winslow, sneaks up on Wigton and sucker punches her.

Amy throws Riley’s hat over a construction fence… Not to worry, Trump Jr. is sending a new one.

Wigton repeatedly tells Winslow “I’m not afraid of you,” as the woman’s male companion bodily carries her away. Amy comes back into camera and repeatedly swings at Abbey until the video cuts off.

It looks like Riley will be getting a very special replacement hat… pic.twitter.com/GPIbjAJ04Z

A call to identify Abbey and Riley’s attackers went out on Twitter.

Do your thing, internet. pic.twitter.com/7SAgRn1pcm

Riley reportedly received a call from someone very special…

Riley was supporting his President when vicious Joe Biden voters attacked him, stole his MAGA hat and pushed him.
Riley was scared and cried in the street.
That's where I met him.
He wanted to call 9-11.
Moments ago Riley got a call from the White House… pic.twitter.com/i9hxgyaUh5

Wilmington police arrested Winslow on Friday, charging her with robbery, conspiracy, and endangering the welfare of a child. She has since been released.

Amy was taken into custody on Saturday and was charged the same with the addition of offensive touching.  She is being held in a correctional facility on $45,000 bail.

Olivia Winslow has been charged with
→Robbery Second Degree
→Conspiracy Second Degree
→Endangering the Welfare of a Child https://t.co/tJSbI9XDxW pic.twitter.com/Z3zG6wh8C3