Trump Announces He is Sending Reinforcements to Wisconsin

Trump Announces He is Sending Reinforcements to Wisconsin

President Trump has announced that he will be sending federal law enforcement officers and the national guard to Wisconsin to restore order in the burning city of Kenosha.

…TODAY, I will be sending federal law enforcement and the National Guard to Kenosha, WI to restore LAW and ORDER!

The president’s tweets come after 29-year-old Jacob Blake, a Black man, was shot at close range in the back by city police officers, leaving him partially paralyzed.

New footage emerged Tuesday of the moments before Blake was shot multiple times by a White Wisconsin police officer as Blake tried to get into his vehicle. The video reportedly captured Blake engaged in a struggle with at least two Kenosha police officers, and shows an officer appearing to try to restrain him before he manages to get up and walks to the driver’s side door, the clip shows.

Viral video taken from another vantage point shows an officer pump several rounds into the apparently unarmed man’s back.

Send troops to all problem cities and DRAG ADMINISTRATIONS OUT IN CUFFS.

Until these crooks realize there are consequences for the laws they are breaking, this illegal behavior will continue. We need to arrest them on the spot just as soon as they begin their destruction. I don’t care how many police it takes. Overwhelm them with police from every direction and get this mess turned around. We have had enough!

Bricks, rocks and everything else should be considered a threat to life and every one of those throwing them should be shot on sight.

For practical purposes, the terrorist group BLM should be called BCLM (Black Criminal Lives Matter), otherwise, why doesn’t BLM go to Chicago to help mayor Lori Lightfoot save the innocent blacks in Chicago from Black-on Black, druglord/gangbanger drive by shootings

Yes, why isn’t BLM shutting riots down, ending the violence and restoring peace in Chicago and everywhere needed? Oh, let me answer! Because they would be restraining and stopping themselves! BLM and the other marxist groups have one goal…… to cause chaos until our country is destroyed at which time they plan to implement a socialist/communist globalist/NWO government and complete the job BHO started!

BLM nigs are only concerned about how much looting they can do. They take everything except WORK BOOTS.

Don’t worry, the police will protect HER house. Not yours.

Let the LIB cities burn to the ground. If troops and law enforcement are set in. The stupid ass people will vote the same assholes back in office.

I’m hoping that THAT is what will happen after the election…..when these RABID ANIMALS get even MORE INSANE (and the criminal politicians continue to ignore)

Why aren’t these state and city leaders being jailed. They all take an oath and when that oath is broken, there should be consequence

Suggestion Mr. President — send in our combat troops and let them take care of business — as needed.

It seems the time is moving inexorably closer to a time when our President will have to declare martial law in order to return these cities where these criminals are burning,looting and otherwise participating in anarchist type behavior to normalcy.

Who on earth writes this divisive crap?

First of all, he had three warrants out for his arrest. One of those was for Rape. There are multiple pictures showing him struggling with the OFFICERS. DOES IT MATTER THEIR COLOR? Seriously?

After getting away from the officers, with the knife still in his hand, he reaches into his car. Now, do you think they should give him the benefit of the doubt he is not going to shoot them, or do as they are trained? Had he shot the cops, it would be a 5 second blip on the news.

This article is not even researched. It is just copied. That is what is wrong with journalism today. Nobody cares to research!

He was not UNARMED!

“New footage emerged Tuesday of the moments before Blake was shot multiple times by a White Wisconsin police officer as Blake tried to get into his vehicle. The video reportedly captured Blake engaged in a struggle with at least two Kenosha police officers, and shows an officer appearing to try to restrain him before he manages to get up and walks to the driver’s side door, the clip shows.
Viral video taken from another vantage point shows an officer pump several rounds into the apparently unarmed man’s back.“ 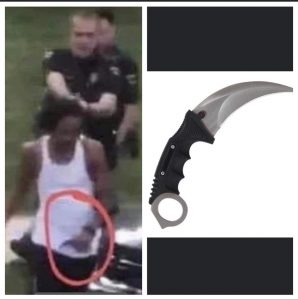 OMG! Thank you for sharing these photos! I had no idea and nothing I had read had mentioned this hawk beak knife (or whatever it is)! In fact, what I have read said he was “unarmed”! It had occurred to me he could have been reaching for a gun in his car and the cops may have had an angle to see it. I also have read nothing about him having outstanding arrest warrants, I don’t remember a reason the cops were after him being mentioned!
Lordy, don’t you just love the MSM?

Mr. President True America needs to show these foolish rioter you mean business, just as you did al daddy and salamonie or whatever their terrorist names are . They have nothing to lose get rid of them, case closed

FINALLY !! Like Eisenhower did, GO TO ALL THE CITIES IN ALL THE DEM STATES THAT ARE ‘NOT’ CONTROLLING DISOBEDIENCE OF THE LAW AND SUPPORT RIOTING !!!
ALSO ‘RECALL’ EVERY DEM CITY AND STATE OFFICIAL THE DOES NOT ENFORCE ‘LAW AND ORDER’ !!!!

Video shows that Blake had a gun.

I say pre warn everyone that live ammo will be used on anyone that throws bricks, rocks, or anything that may kill or injure a person.. protesting great and fine but NO to rioting

The guy had a BIG criminal record, he was no victim but a perp, got into a scuffle with the police, tased and it failed and he goes to his car not to drive away but to get something and btw, he was known to have weapons in his car. Kenosha needs to do but failed to do what the Detroit Police did and I usually criticize the DPD for lack of response but when they had a “protest” and it went its regular way of violence, not peaceful (HAHAHA), the DPD went in and SQUASHED IT QUICKLY and the did it efficiently, to prevent the peaceful rioters from gaining momentum. THAT IS THE WAY TO DO IT.

President Trump, may he be successful in this. SALT IS A GOOD WAY TO FLOW

Check out what happened in Rockford, ILL on August 1st…shown on you tube. Between the Police and the National Guard they broke up the riot in less than half an hour, cleared the streets and nothing was burned down

I would like to see the whole story not just a 5 second clip.

that would not be in the best interest of the lame stream lying media, it would show that almost all of those killed had it coming as they were already criminals.

Reagan was elected governor of California in 1966. As governor, he raised taxes, turned a state budget deficit to a surplus, challenged the protesters at UC Berkeley, and ordered in National Guard troops during a period of protest movements.

If you are Black in this country, it is perfectly okay to fight with a Police officer and resist arrest! God help the Officers if they do their jobs and stop these criminals by ALL MEANS NECESSARY!

So, ‘unarmed’ is supposed to mean ‘NOT DANGEROUS’??? When this CRIMINAL THUG would have gotten into his car, he would have ran down those cops…..WITHOUT A DOUBT!! Because, THAT’S WHAT THEY DO!! BLM = BURN, LOOT. MURDER!!

Take a good look at the knife that this thug was carrying, and then tell me he was not dangerous,

make it a federal crime to riot ….felonious……mandatory 5 years in jail.

maybe they will get smart and listen to the police, instead of acting stupid

I hope the soldiers will be given live ammo with orders that they may shot if they fear bodily harm from a person as they do have the right to self defence even if they are in uniform. I think soldiers s/b given the right to opt out of deployment if they are not given the means to protect themselves.

Who says this criminal was unarmed only the media and everyone knows that they can’t be trusted.

The first looter, rioter should be shot where they stand, where ever they are.