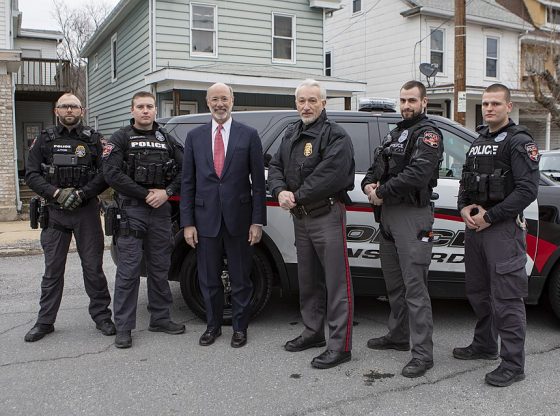 The state’s limits on gatherings and closure of nonessential businesses violated the First Amendment and the due process and equal protection clauses of the 14th Amendment, according to a 66-page opinion by U.S. District Judge William Stickman IV, a Trump appointee. The governor’s office confirmed it will appeal the decision.

The case stemmed from a complaint filed in May by four Pennsylvania counties — Butler, Fayette, Greene and Washington — that argued against the state’s orders to close “non-life-sustaining” businesses and limit gatherings to 25 people indoors or 250 people outdoors.

“The court believes that defendants undertook their actions in a well-intentioned effort to protect Pennsylvanians from the virus,” the ruling said. “However, good intentions toward a laudable end are not alone enough to uphold governmental action against a constitutional challenge.”

President Trump quickly celebrated by retweeting posts on the issue:

"Governor Tom Wolf should not be allowed to defraud the people of the United States!" President Donald Trump tweeted his concerns about mail-in voting in Pennsylvania, sharing a story citing potential issues in the commonwealth. https://t.co/W1P4lNlKRW

BREAKING: A federal judge on Monday struck down Gov. Tom Wolf’s pandemic restrictions that required people to stay at home, placed size limits on gatherings and ordered “non-life-sustaining” businesses to shut down, calling them unconstitutional. https://t.co/sxdqroQLrk

PENNSYLVANIA GOVERNOR TOM WOLF AN YOUR STUPID WIFE …..YOUR NOT GOING TO MURDER US !!! TRUMP 2020 … WE LOVE PENNSYLVANIA ⁦@realDonaldTrump⁩ pic.twitter.com/HxzC3VaYIi

Fox News host Laura Ingraham also weighed in on the powerful condemnation of the lockdowns by Wolf.

“It was a phenomenal ruling,” Ingraham said. “We’ve been telling you this for months. Our constitutional rights may not be indefinitely abridged by executive fiat, period.”

On “The Ingraham Angle,” Ingraham said that in contrast to states like Pennsylvania, New York and California, states such as South Dakota have balked at forcing their economies to shut down, even partially.

“They have done that because the societal cost to daily life — to everything about the lives we lead — is just too high,” Ingraham said.

“First, lockdowns don’t work. Just look at the number of cases rising in Europe if you think they do work. Second, the damage that they cause is catastrophic to our economy, our children’s education … mental health and our safety.”

Ingraham also pointed out that Judge Stickman issued a “stinging” rebuke by ruling that a response to an emergency or a pandemic cannot undermine the system of checks and balances.

Advertisement
Help Bring These Conservatives to The Senate [ACT TODAY]
Trump had Shot to Take Out Dictator, But THIS Former Adviser Stopped Him
These Current and Former Trump Officials Destroyed The Atlantic’s Narrative

Hey Wolf you and your wife can grab your bottom lip … pull it up over your forehead and swallow or you can bend over and stick your head up your anus !

Come on Thomas tell us how tell us how you really feel about those two libtards,I think your first post only scratches the surface,give us more!

AMERICA DEMANDS these tyrannical America hating dirt bags be expelled and indicted. Their administrations too.

Wolf pull your head out of sand and do something for Pennsylvania instead destroying it.

Hit these A HOLES hard in the pocket book and maybe the next A HOLE that comes along will think twice before putting party politics ahead of the well being of the people they govern!

Since the Court Upheld that the actions were Unconstitutional, they were in fact an ILLEGAL seizure of PROPERTY. This falls under imminent domaine laws (seizure of property).
As I understand it the government MUST pay full value for all property seized. This means paying the overhead, employee wages and at least the known average PROFITS that would have been earned.
If C-19 would have enhanced the type of operations of a business an argument could be made that there was loss by lost opportunity as well.

I say that ALL business affected need to get together and sue the State and governor immediately for recovery under law.

Yes, and the same in the other 49 states as well.

Damn shame that good American patriots have sue to get fair and just treatment as as demanded by the constitution. These idiot, liberal, power hungry politicians just use tax payer $ and issue unreasonable edicts, totally disgusting!

People of Pennsylvania, please get out and vote in person and VOTE RED UP AND DOWN THE TICKET! Tell your COMMUNIST LEADERS to go and pound sand! This is getting scarier by the minute. PEACE! TRUMP/PENCE 2020

It’s time to elect a group whose primary purpose is to Legally be able to over see what Government Officials are planning, before they can execute their plan. It’s time to stop All sneaky Bills being introduced by Gov’t. Officials with out to knowledge of it’s Citizenry. We as Citizens need to be aware in advance of, so we may Judge and elect Bills we care for. just like the Officials of Our USA are. The Key here is in ADVANCE !!!!!

Extraterrestrial life has been found hiding in a basement in Pennsylvania. Now he can escape the lockdown and run for President.

Now that this has been cleared up by the court now its time to personally sue these judges in civil court for the damages their little politically motivated stunts have caused.We have to break these libtards from viewing every crisis that comes along as an opportunity to advance whatever political agenda that they are trying to push at the time.Look at the damage to the country these democrat idiots have caused,here in Washington state Governor Kim Jung unslee has still got us all puckered up and its all politically motivated to try and take down Trump,if this were not an election year none of the BS would be happening!

You named the real cure for these little dictators. Remove their immunity from civil lawsuits! Then they will have personal skin in the game. They will actually have to consider the constitutionality of their dictates.

Finally, someone with the Knowledge and Guts to do the right thing!!!

Mona in Michigan,
You may have noticed one person walking around without a mask – me. I have avoided that from the beginning – someone must exhibit sanity – as I have also conducted the Lord’s Divine Service every Sunday, throughout, because that IS the ONE THING ESSENTIAL – Jesus told us so in Luke 10:42.
The only thing these mask orders are accomplishing is preparing people for more Democrat dictatorship. What will be the next Democrat Domestic Terrorist decree? Everyone will have to have 666 tattooed on their hand or forehead to buy or sell?

If these masks and (anti)social distancing are so necessary, why do people continue to contract covid the same way they get a cold or the flu? People get sick and die all the time (see ESSENTIAL above). We are destroying our society for a problem that is endemic to a fallen Creation. And only evil people are “benefiting.” Actually, parents may be benefiting by closer relationships to their children who are not attending the leftist, Democrat, propaganda machines known as “public schools.”

If you want to be safe, change your diet to healthy, natural foods, with a good balance of supplements, and start a vigorous exercise program to build your natural God-given immunity to Communist manufactured disease.

But to protect America we must STOP murdering God’s children at the rate of 3000 per day, over 60,000,000 so far. I’ll bet antifa hasn’t burned down any abortion mills yet. We must put homosexuals back in the filthy closet they came out of. We must cleanse our society of all the false gods and religions to which we have fallen prey, beginning with Democrat Domestic Terrorists. Realize that this is a war that only one side will win. Evil will never leave us alone, it must be eradicated. Wars are never pretty, but if good people don’t join together and fight, we will be wearing the mask of evil dictators – alone.

Rev. Ronald Roland,
First, My wife and I believe we had C-19 in Jan/February in an area of Florida that it was not supposed to exist. My cousin works for CDC and we described the exact sequence and timing of the disease. She said, yup, you have had it. I said “but it didn’t exist in Florida in Jan/Feb. Her answer. “Yeah, right”. Remember that samples of the septic system in Italy proved it was in Italy in December. hmm…really? Why have US cities not checked their stored samples?
The death toll is NO DIFFERENT from any annual covid type flue (they always take those with high risk co-morbidities every year). The difference is that we can TRACK this one. Think about it. Now add this to your thought. There are three countries today that have a basically untreatable form of consumption (yup, tuberculosis).
I think that the governments of the world are working in advance to learn how to control a major disease that WILL cause high percentages of mortality not related to co-morbidity. They are using an annual covid disease (or an engineered one?) as a method to track and to “normalize” changed social behaviors PERMANENTLY.
Once this happens socialism and communism will be normalized too. The dems recognize this and are doing everything they can to assure that socio-communo-fascism is their GOAL.
Creating fascist groups like antifa and having them call everyone who is against them fascists is just the start. It is how HITLER and a host of other dictators started and the Dems are right on board now.

I have never read someone that I am more completely in agreement with than you. The backdrop of everything we do is this massive and barbaric practice of child sacrifice we call “CHOICE” (This is so they don’t have to call it what it really is: infanticide). If we keep doing this, God will pronounce a fearful judgement on our country.

Your comments on homosexuality are also right on the money. I love them like I love all sinners, but I will never agree that homosexuality is not sin. If they want to deceive themselves, they do so at their own peril. They are like a person jumping off a skyscraper while saying, “I don’t believe that gravity is a valid physical law.” They can say it for as long as it takes them to hit the pavement below.

Finally, to wear a mask is to bow down and kiss the ring of a dictator. They can put me in jail, if they like. But I bow only to the Lord Jesus Christ.

The worst thing about all this, is these people have a sure pay check coming. To them this pandemic is no worry. Constantly trying to make check available and make people dependent on this checks is wrong. I like to make my own living and buy those things I love. But if I have to depend every month for sustainment, then you must be crazy. Stop the lockdowns and let us get back to work.

Right on Noe. Let’s quarantine these losers with our votes.

Now we need ALL OF THE REST of the states to do this!!!!! I’m really SHOCKED at what the Governor of TEXAS, Gregg Abbott, is doing!! Has he LOST HIS MIND?!?!?!?!

Hopefully this ruling will be upheld. If so, it should be used to get the same laws in other states tossed.

Mr. Wolf, you are the governor of Pennsylvania and it’s citizens, you are not the king of the world. You are not above the rule of law, and you’re certainly not above the Constitution, even if you’d like to think you are. Sorry pal.