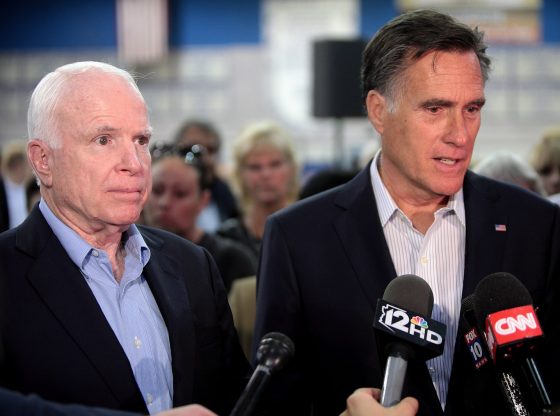 GOP Senator Martha McSally who is in a tough battle in Arizona has come out and condemned President Trump for his criticisms of the late-John McCain.

McSally said “it really pisses me off” when President Trump attacks McCain.

Sen. Martha McSally, R-Ariz., said during a debate against her Democratic opponent Tuesday night that it “pisses me off” when President Trump attacks the late Republican Sen. John McCain.

McSally’s opponent, Mark Kelly, pressed her for a reaction to the president’s alleged comments calling war heroes “losers” and “suckers,” but she declined to comment on allegations from “anonymous sources,” she said.

Kelly went on to say it “concerned” him that McSally, a Trump ally, has never defended McCain against the president’s insults.

“Quite frankly, it pisses me off when he does it,” McSally said during the debate, adding that she has told the president in private and public settings not to do so. “Let’s let him rest in peace.”

John McCain, may have been a war hero, that’s debatable. I voted for him for president only because I hated the alternative. He embarrassed me as a conservative when he insulted President Trump, the greatest president in my lifetime! I did not wish him dead, I wish he had just retired, but I am glad he’s no longer in the senate. As far as McSally goes, I would NOT support her because of her ignorant comments about President Trump!

Votedemout
Reply to  Bill A

So you would allow Kelly to take the seat??? You sound just like the Never Trump crowd. Get your head out of the twilight zone.