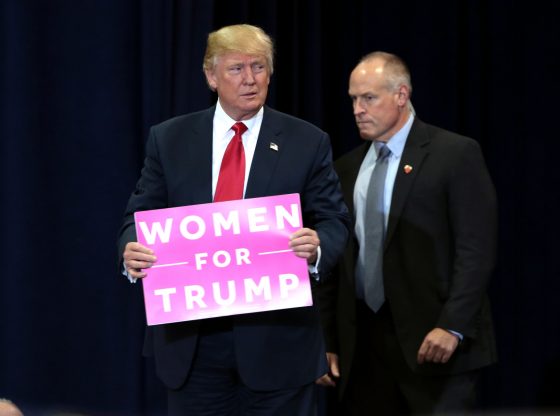 Suburban mother, Lauren Appell is telling everyone why she supports President Trump over Democrat Joe Biden and is urging voters to make their choice based on policy, not personality. Appell explained that President Trump’s impressive track record of following through on his promises compels her to vote red.

Appell echoed the sentiment that Trump has done more in his nearly four years as president than Joe Biden accomplished in his nearly 50 years in office, eight of which he served as vice president.

A report from Fox News:

Appell said the “safety” of families is paramount to suburban women in the 2020 election.

“First and foremost, I think the safety of our families and if you look, Joe Biden can’t even say the words law and order,” Appell said.

Appell went on to say, “It took him months to even kind of sort of somewhat condemning all of the riots and the looting going on in this country, and even now, we’re being told that this is a mostly peaceful protest. Donald Trump has gotten the support of countless police organizations and unions that have reluctantly come out to even support anybody in past elections and if they did, it was always the Democrat because they know this president has their back.”

While Biden is still polling ahead in some swing states and the gap continues to narrow as the election gets closer.

No surprise here. None at all. 🙂

Totally agree with this woman 100%.

GAG ME WITH A SPOON EVERYTIME I HEAR BIDEN SPEAK. EVERYTHING THIS COUNTRY HAS BEEN BUILT ON THE DEMOCRATS WANT TO TAKE AWAY FROM THE AMERICAN PEOPLE. THEY LINE THEIR POCKETS WITH YOUR TAX DOLLARS. THEY WANT US TO SUPPORT THE ILLEGALS, THEY SUPPORT THE BLM WITH THE BURNING, LOOTING AND KILLINGS. IS THAT THE AMERICA YOU WANT, I KNOW I DON’T

Anyone who votes ‘personality’ is a CHILD!! I, personally, LIKE Trump’s ‘tell it like it is’ blunt style! But I VOTED for his POLICIES!

The policy of of putting up short pieces of cheap ass fence and calling it a wall?

You need to go down there, while it’s being built, see if you can climb over a section of the new wall (fence). While your there, get a few of those men, building the wall (fence), to gather around, tell them what you think of their cheap ass fence. See what their thoughts are on the subject. I suggest you be prepared for different point of view.

Albert They for sure will beat some sense into you.

Bill A
Reply to  Albert Hess

Another looser that wants to support illegal immigrants. Let the good LEGAL immigrants, come, and then support themselves, like they have since this country started.

Vote on policy,not personality, exactly what I told my wife!

Your wife does exactly what you tell her to do?
God bless her soul.

Biden is and empty head and an empty suit laden with corruption. Heels-up Harris is a communist hoe bag.

My whole family agrees – running of American for all Americans requires policy and policy changes that our past presidents and Congress have never implemented even though they promise election after election to do so. We do not need politics – we need new ideas and change from the old hat that has done nothing for us. We need a Congress that supports our president and contributes to the benefit of all of us. Elect that person again so we all prosper together as a nation – it is the only solution. Trump 2020.

Our politicians had become lazy and some even corrupt. It is time for Americans to take back our Republic and return it to the vision of our Forefathers. America for it’s people and not for an elite mass.

I appreciate my president,i appreciate that he tells it like it is and he has to get his point across by using a few swear words now and then so what. He got your attention didn’t he.
biden can get away with molesting his niece, then hiding her away so no one can get her side of the story. taking millions from china, getting a man fired because he won’t break the law the way biden wants him to. Has a drug addicted son who has to pay whores for his overloaded sex drive even going so far as to have sex with his niece. God only knows who else father and son have been molesting. Biden wife the mouse that she is just turns the other cheek and pretends nothing is going on and that her sons are perfect little angels when she knows dame well they are not. Biden had 47 years in office and did nothing but collect a paycheck he didn’t deserve. what goes around comes around and there time is running out. And that daughter of Bidens who charged 137 thousand dollars on a stolen credit card needs to join them in prison. no more paying off judges to let them walk. THE BIDEN FAMILY AND I MEAN ALL OF THEM ARE NOT ABOVE THE LAW.

Our government has been forced to a standstill because the liberal socialist agenda refused to cooperate with the conservative wing of the party. Our founding Fathers created a system of checks and balances that was to protect us against such dilemmas as we face now. Through a long period of social and education management by a hidden agenda the Republic must now face the difficult choice of abandoning the principals of liberty and submitting to a secular One World Order or standing strong against the socialist takeover.

Tell Pelosi to get off the pot and actually advance for the country not her beholden to the party . Someone vote to remove her from office .

There are some out there that would vote for that DemoCrap Biden, I wonder what is wrong with these people that have a serious deficit of common sense?

BECAUSE THEY DON’T HAVE THE BRAINS TO CHECK OUT WHO THEY ARE VOTING FOR THEY THINK OH HE IS A DEMOCRAT SO HE HAS TO VOTE FOR HIM. PLUS THEY THINK BY VOTING FOR THIS CRIMINAL THEY WON’T LOSE ALL THE FREEBIES THEY GET. THEY MIGHT HAVE TO GET A JOB AND WORK FOR A LIVING.LIKE MOST AMERICANS HAVE TO.

Or is it “medication”

Or is it “prescribed”

It’s the medication from Big Pharma they have prescribed to them.

Fell for his lies and voted early . OOP’s. Can I change my vote??

Yes, you can reverse your vote. Go in person on Nov. 3rd and tell your polling
place that you wish to revoke your “mail-in-ballot” and VOTE IN PERSON. You
are permitted to do this. The polling place will remove your mail-in-ballad and let
the “in-person” vote.count !!!

“we don’t look at it as personality” – Why not look at personality?
We have a positive, upbeat, citizen who has over and over voiced his belief in One Nation under the Creator God, and tried to bring that ideal to all people – versus – a man, woman and party of terrorists who are bursting with hatred for the human race and want to burn America down.
What’s wrong with looking at personality?

First of all, I have said over and over again that the demented little troll is not ahead in any poll! Look at his pathetic rallies then compare them to President Trumps! This is another democrat plot to deceive us into giving up! The democrats run on deception and lies, cheating voter fraud etc! That do not care what we the people want they only care about wealth and power! Biden represents poverty, control, no God, No joy, No peace only dark winter as he himself has said! VOTE TRUMP, VOTE STRAIGHT REPUBLICAN FOIR OUR SENATE, AND HOUSE!

Democrat’s try a fast one .

OLD JOE IS TO SLOW LOL

Far and few now days . I used to be a demas Hillary. Pamela Biden Obama pelosie. Pritzger they are all commies and the only part of them I want is their ++++ on a stick and their a++ in the ground . they don’t deserve life in USA. 🇺🇸 VOTE TRUMP 2020

Hears Hoping that ALL WOMEN will listen to this women and make the decision to get America back on track to becoming the GREAT NATION we Have Been and Can be with Donald Trump in the Oval Office for 4 more years….We will not survive as a NATION under a HARRIS ADMINISTRATION and everyone knows that the case. Weather or not they will admit it. It is out there and it is very SCARY