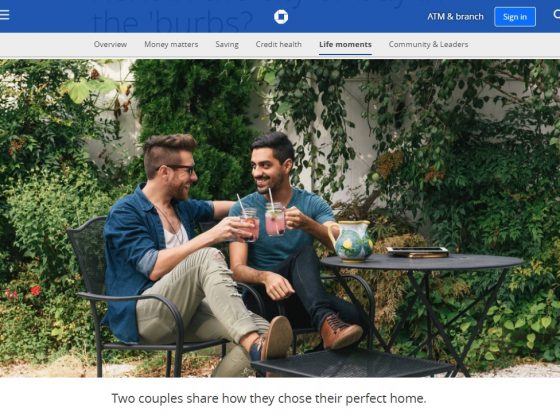 NEW YORK — JPMorgan Chase Bank may have achieved the impossible: Its recent advertising should upset homosexuals and homophobes alike.

I recently encountered an online ad that Chase produced to promote its mortgage services. “Rent in the city or buy in the ‘burbs?” the ad asks. The photo below the headline features two young men staring very happily into each other’s eyes. They sip what appear to be tropical drinks while seated cozily together in a luxuriant patio. They both desperately need to shave, underscoring this era’s disturbing and noisome metastasis of hair across seemingly millions of needlessly despoiled American faces. This irritant aside, these two could not be any richer a portrait of loving bliss.

“Two couples share how they chose their perfect home,” the ad continues.

Great, I thought. I cannot wait to learn the true story of how these two young Romeos decide between a comfortable life in an urban apartment or a new start in an actual house in a bedroom community — perhaps Santa Monica, Scottsdale, Winnetka, or Greenwich. And, I thought further, how terrific that Chase is telling the tale of these young men as they mature and secure their American Dream. That Chase would do so in the context of real-estate finance confirms that this country has become increasingly tolerant, and indeed accepting of, gay relationships.

Chase’s ad then discusses these two couples on their journey toward homeownership.

Michael Franklin and “his wife” (unnamed in the ad) debate the merits of staying in Brooklyn or moving to Westchester. They weigh the benefits of more space and greenery against the costs of commuting time and excessive quietude, far from the sidewalks of New York. Eventually, they stay put in Park Slope, never mind their tight quarters and the clamor of the neighbor’s alarm clock through their common wall.

Anne and Daniel Sullivan, meanwhile, conclude that buying a home in Arlington, Virginia makes sense. They desire the investment potential of purchasing a house. They like the local schools and the proximity to their jobs in Washington, D.C.

And what about the stubble-faced boys with the pink-grapefruit cocktails and the stars in their eyes?

The text of this ad never mentions these young men.

Are they an actual couple? Are they actors who first met at Chase’s photoshoot? Or was this picture just some clip art that Chase’s ad mavens excavated via Google Images?

JPMorgan Chase clearly has zero interest in treating gay men as real people whose lives and life challenges are worth presenting to their current and potential customers.

Instead, the gay guys in this ad are mere props. “Hey, look!” Chase shouts, waving its virtue over its head, like pom poms. “We’re so liberal. We have a gay couple in our ads. Please line up and pat us on our backs! We are the World’s Wokest Bank!”

And yet we learn nothing about these two scruffy but evidently content young guys, their aspirations, travails, and their triumphs. They are just solid objects, designed to transmit the oh-so-modern values of JPMorgan Chase, without treating these two grown men as human beings. Chase might as well have used a picture of two Ken dolls. Or perhaps Sesame Street’s Bert and Ernie.

This ad should outrage homosexuals, for the reasons above, and homophobes, who probably are not so crazy about seeing these two chaps together in an ad, without what gay-uncurious detractors consider the advantage of female companionship. Had Chase bothered to explain how two American boys made up their minds about remaining city slickers or joining the landed gentry, they subtly might have made the point to homophobes that gay guys face the same choices they do. That might have accomplished something.

Since Chase showcased the real-estate experiences of two heterosexual couples, they should have shown a photo of one such straight pair or at least faked it with male and female models. Photo and text would have aligned, and you would not be reading these words. I would be at brunch right now, rather than grinding my molars above my computer keyboard.

On the other hand, by giving gays and anti-gays a fresh reason to be upset, maybe America should thank JPMorgan Chase for, in a very odd way, bringing us together.

Advertisement
Help The GOP KEEP The Senate [ACT TODAY]
Dem Senator Tried to Defend Radical Senate Candidate With Bible Verse: Still Got it Wrong
The Leftist Totalitarian Agenda is Out of the Bag

Everyone knows there was major fraud. It does not pass the smell test. Stop counting in the middle of night. Never happened before in our election history.

They backed in a van and 2 cars from out of State filled with Fraudulent Ballots and brought them in from their Ballot Factory to be counted ! Seems like a van and 2 cars full of fraud to me ! Someone or a few someones need to go off to prison for at least 10 years !

My stomach turns every time I hear Biden and Obama’s voices. I have to change the channel. Biden on Fox and Obama on 60 minutes. I don’t watch 60 minutes but Fox keeps showing the clips of him. I can’t watch Fox anymore.

OMG, I’m not alone in feeling nauseous when I see Biden, Obama, Clinton and several other Democrats! 60 Minutes has become the worst with Scott Pelley doing the phony questioning. Can’t watch it anymore!

Please stay in NYC, that’s our advice for the gay couple!

I, for one, am sick of the homosexuals being shoved in our faces!! They portray it like 1/2 of the country are gays; FAR from the truth/REALITY!! It’s a very, very, VERY SMALL fraction in the US that are gay. Just like this year, companies have started to put blacks in 95% of commercials when they are only 13% of the population. I’M SICK OF LIVING IN A FALSE REALITY that is MADE UP by the Social Engineer Propagandists!!!

Deroy Murdock – Glad to see that you still have a moronic take on all things conservative. I’m sure your boyfriend appreciates it. The rest of us, not so much.
﻿