Another Republican Will Vote ‘No’ to Neera Tanden’s Confirmation

Another Republican Will Vote ‘No’ to Neera Tanden’s Confirmation 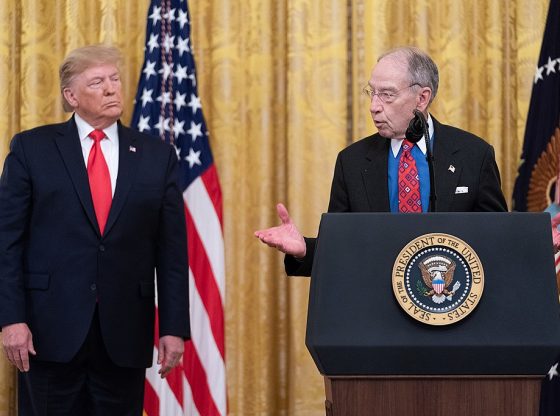 Yet another senator has revealed their stance on Neera Tanden, Biden’s choice to lead the Office of Management and Budget and it’s not good news for Biden. Senator Chuck Grassley announced he will vote against Tanden’s confirmation.

When asked if he’d support Tanden’s nomination, he simply told the Capitol press pool, “No.”

“I said no and that’s all I’m going to say,” he responded when pressed for a reason.

The Iowa senator is the latest in a mushrooming number of centrist Republicans to come out against Tanden, whose nomination is hanging by the thinnest of threads in the Senate.

Several moderate Republicans, including Collins and Sens. Rob Portman (Ohio) and Mitt Romney (Utah), soon announced their own opposition. Grassley was among the Republicans the White House was still trying to win over, though some observers were skeptical he’d be convinced.

Tanden’s only hope rests with Sen. Lisa Murkowski who has yet to reveal how she plans to vote on the nomination.

It all depends on the number one rhino, come on man, give me a break.How pathetic,to get a traitor to vote the right way, especially this worthless,incompetent one.

I am so disgusted with a lot of Republican Senators right now …. not so much as one of DJT nominees received any “yes” votes from any Democrats …… NOT ONE!! Yet as I keep track of the votes for Biden’s nominees they consistently receive “yes” votes from several Republicans and I don’t just mean the usual RINOS like Romney, Murkowski, or Collins…. and a few others…… one of the nominees received 97 “yes” votes for confirmation….. ninety friggin seven… only 3 Repub’s voted “no” What the hell is going on? This is just so infuriating. They all should be consistently voting NO for ALL the nominees… not that it would make a difference because they have the majority anyway… not to mention it would keep KH busy in the Senate having to break the tie votes … instead she’s had free reign to do whatever to promote the destruction of our country…
DESPICABLE!!