Trump Jr.: ‘If you are a Democrat, you can get away with it’

Home /Media, NEWS/Trump Jr.: ‘If you are a Democrat, you can get away with it’

Trump Jr.: ‘If you are a Democrat, you can get away with it’ 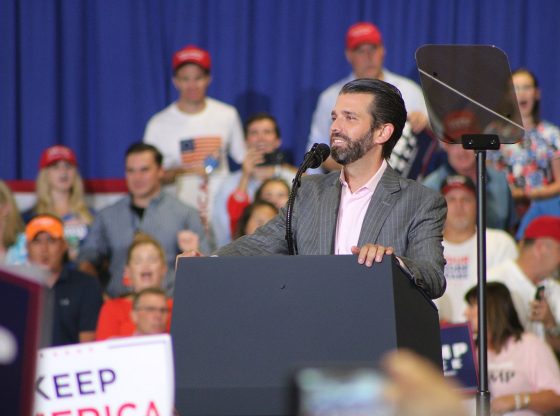 “If Andrew Cuomo were a Republican governor, they would have perp-walked him into a courthouse by now,” Trump Jr. told host Maria Bartiromo after she showed a clip of President Biden refusing to call for Cuomo’s resignation.

Biden told reporters that an investigation overseen by Democratic New York Attorney General Letitia James “is underway and we should see what it brings us.”

“Listen, it doesn’t surprise me,” commented Trump Jr. who was promoting his new book Liberal Privilege. “Beyond the obvious, the sexual harassment allegations, you have a few allegations now that seem to go much further than that, there was actually touching involved. That seems to be more like sexual assault to me.”

He pointed out that Cuomo is actively under investigation for covering up New York nursing home COVID-19 deaths by under reporting nearly 10,000 to state legislators in August of 2020.

“This guy was made a hero when he seems like he’s maybe the biggest predator in American politics today. And yet that’s what you get if you are a Democrat. You can get away with it,” Trump Jr. continued. “No one is going to hold you accountable, the media will give you an Emmy Award while you are either sending Nana to her death or you are groping one of your staffers.”

He went on to contrast how Democrats are held to a different standard than Republicans. “If (Republican) Ron DeSantis did that as Governor of Florida he’d be in jail by now, but Andrew Cuomo will likely get away with it. Joe Biden won’t even comment on it,” he remarked, noting that it didn’t stop Biden from commenting on Brett Kavanaugh.

“But that’s what it is, it’s a double standard that we have to correct. It cannot continue like this anymore,” he stated.  “There should be equal justice under the law. Right now there is only justice under the law if you are a Republican. You get justice served upon you, usually in a negative way. If you are a Democrat, you get away with whatever you want.”

Trump Jr. went on to comment on how Biden’s time in office has affected the illegal immigration crisis at the southern border. “I think it’s probably the most disastrous first-60-days in the history of American politics.”

“[Biden is] trying to and will be able to say ‘the border issue is Donald Trump’s fault. We don’t know how, because the border wall was working’. That was caused entirely by Joe Biden,” he concluded. “When you say congratulations, we won’t be enforcing our laws, we will give you free health care, we will give you free education, what do you expect?