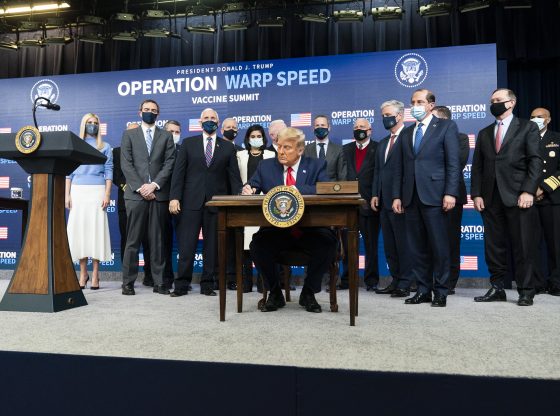 President Trump launched Operation Warp Speed on May 15th of 2020. The President was optimistic of the success claiming we would have a vaccine by year’s end. He was right, and it has objectively been a success.

As soon as Trump announced the initiative the media lost its mind calling the President reckless for having the optimism that he did. They were obviously wrong, and we cannot let them forget about it.

Now that a Democrat is president, scientific “experts” and uncredentialed media pundits alike have been parroting the party line—”See, vaccines work!”—without mentioning, much less crediting, Operation Warp Speed as a key factor in getting so many Americans vaccinated so quickly.

At least they’re (sort of) consistent. These same pundits did not think much of Trump’s vaccine initiative when it was announced in May 2020 with the aim of producing hundreds of millions of vaccine doses by 2021. Dr. Anthony Fauci suggested Trump’s ambitious goal was “reckless.” The Washington Post interviewed scientists who warned it was “dangerous to set a timetable, given the scientific unknowns and the danger of rushing testing.”

CNN, as you might expect, has covered President Joe Biden slightly differently than it covered Trump on the issue of vaccines. Whereas the former president was “ginning up pressure” on drug companies to develop a vaccine quickly, the network has praised Biden’s “urgent, wartime effort” to get Americans vaccinated.

The New York Times published an interactive graphic purporting to answer the question: “How long will a vaccine really take?” The most optimistic scenario, according to the Times, was that a vaccine would not be approved for emergency use until January 2024. Fortunately, the projections were way off.

As of this post roughly one-third of the country has been fully vaccinated or, if Trump was still President the media would classify it as a measly 106 million people.

The mindless liberal media always think they have the answer for everything based on how they feel at the time.

They are paid puppets.

The “media” has not only lost its mind but also any sense of ethics, fairness or unbiased objectivity. They spew nothing but lies & stories that they make up. The public is fed up with them, Washington, D.C.phony politicians openly lying to us & anybody who forces free people to become brainwashed. ENOUGH already!

To many smart Americans will never buy into their BS.

The FCC is useless as gender on a dumbocrap

Thank Trump if you got a vaccine.

Isn’t intentional lying on the air illegal? It isn’t their opinions so much as direct orders given by their “bosses”… Can’t help but wonder about these people growing up. My kids are in their 40’s – and remember that their lying to us deserved some time in the corner. This corner for the demonkrats and the media should be extended corner time in a cell. After all – they started with President Trump and have doubled down with sleep joe’s rules.

Agree, patricia! But what you dished out to your kids, sounds mild compared to what I dished out to mine if they didn’t follow the rules! They were very well versed on what the consequences would be for poor choices. I didn’t abuse or beat them, of course, but a few good swats on their little behinds did the trick — very early on, too! 🙂 Although making my son sit still worked some, too, because he was very active! 🙂

Aren;t the people who report the news supposed to be non-partisan? *smh* Seriously, some days I think Edward R. Murrow should rise from the grave and take CNN, MSNBC and the Big Three to task somehow for what a hash they’ve made of news reporting… we wouldn’t need things like Newsmax, Fox News or the Blaze if it wasn’t for them!!

At one time, Josh, they taught journalism students the 4 C’s of Journalism: Clear, Concise, Correct, Complete. Pretty obvious that they threw those principles out several years ago! Now the only thing they report are their biased liberal opinions. I often watch Tucker, Waters, Hannity, Judge Jeannine, Ingraham, Gutfeld, and Hilton on FOX, but otherwise, it’s Hallmark for me! And an occasional Law and Order. 🙂

They all have TDS, incurable, except if it wasn’t for Trump’s warp speed on the vacines, there would be alot more dead, so stfu, Trump made this happen,not mental case, puppet,slo,joe, what an embarrasment, hidenbiden is,the laughing stock of the world.

The MSM ends up in the dung heap of human history. Nobody respects the media or watches them anymore with the exception of Fox News, Newsmax. Breitbart, OAN, and Americans Voice War Room.

The media and its democ-rat colleagues (one and the same) are certainly more than welcome to line up and feast on their much-deserved ration of “crow:! They will keep it up and dessert will be forthcoming!! ENJOY!!

The democrats haven’t accomplished anything. We know this, and they know it, so what’s all the ruckus about?
I’ll give you a heads up, and it’s certainly not doing a fine job, in fact it’s the worst thing to happen to the United States this century.
To this day all the democrats have done is stand in the way of progress, and individual freedoms that they hate so much.

Happy to see that CNN & MSNBC’s ratings are going to the sewers. Apparently the Border’s on the same route. Those of you who have facebook, google or amazon prime or twitter should get rid of your accounts. Don’t bother to BUY N.Y. Times or Wa. Post. Since they issue nothing but lies, drive them into bankruptcy. No readership or subscriptions will make them all lose $$. “We” know what Trump did for 4 yr.s since “the lying media” covered all of it, albeit skewed. As “Schultz” from Hogan’s Heroes would say, “I know nothing” from the Biden Administration.

Vaccines for a rapidly mutating virus do not work. Too much money wasted on these. Developing countries are using Ivermectin with great success as both a cure and as a prophylactic. I gives patients about 2 years of protection from Covid-19.

Whenever POTUS TRUMP intends to do somethingg big H>E DOES IT!
Promises made Promises KEPT!

My gosh, how I miss our good President Trump! 🙁

And exactly how can the lamestream media lose something it never had?

“The Media” has been WRONG for at least four Republican terms … Reagan, Bush I, Bush II and Trump … the Dems seem to be RIGHT while they’re in office …. have you noticed? Or, are you history-adverse????