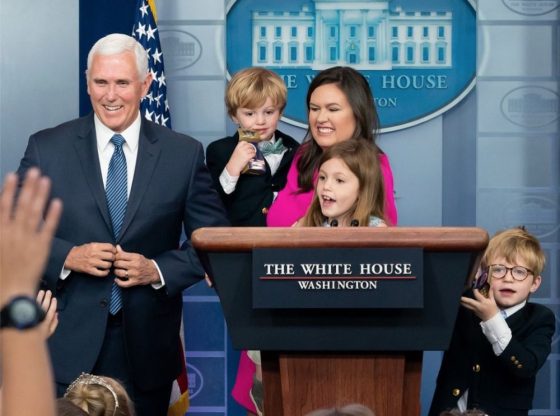 Thank you for the outpouring of support from all across our state and country! pic.twitter.com/cvWsvnp6xV

Sanders, who was press secretary during the Trump administration, has raised more than $9 million since announcing her candidacy in January, according to her campaign, which said more than $3 million of that amount has come from Arkansas residents.

“I am thankful for the outpouring of support from all across our state,” Sanders said in a statement. “It’s clear Arkansans want a leader who will defend our freedom and stand up to the radical left, grow our economy and create jobs, and increase access to quality education and opportunity for a brighter, more prosperous future.

The fundraising haul comes as Sanders, who left the Trump administration in 2019, is running against state Attorney General Leslie Rutledge (R) for the GOP nomination, according to The Associated Press.

Sanders and Rutledge are joined by four Democratic candidates running to succeed Gov. Asa Hutchinson (R), who is term limited.

If elected, Sanders will follow in her dad’s footsteps as governor.

Go Sarah. She will make a great Governor.
She has my financial support, even though I’m not in Arkansas. Current guy is a TOTAL RINO!

It is so easy to tell what people love America. Sarah Sanders is the winner takes all, I will Donate money any day of the week with pride to Sarah Sanders.

That’s all great, but just think of all the people who are hungry……..that money could do a lot to feed them???????????????????????????????????????? instead of going to candidates that only serve themselves…….they act like they are going to help us and talk a good rouse…………..but it never seems to go to the people. If there was a fund that we
all could constantly donate to to JUST feed America and it REALLY WENT TO FEED THE PEOPLE THAT NEED IT…………wouldn’t that be great.?? This money people donate to
candidates could help in so many other areas. The people could do this all themselves be farmers/ranchers/doctors/etc, etc, etc without the Government involvement in everything
taking our earned money for (their junk) we could earn the money, make the products and
use our own hard earned money to put it back into the system where it needs it the most.
Instead of lining the pockets of these lizards. I am not saying Sarah is one she is a good
person, but it never seems to go to the people. It needs to STOP