Home /Government, Opinion/Biden’s Vaccine Mandate Could Be the Opening to a Very Dark Future

President Biden and the Democrat Party have no problem bulldozing over the rights of Americans in their quest for power and control. As President Biden announced his new vaccine mandate he made it clear that he believes he has the sole right and power to interfere in millions of American’s medical decisions. The move should rightfully cause Americans to stop and question if Biden can do this, how much further will he go?

A recent op-ed from Townhall raises the careful question that if President Biden can issue and enforce this vaccine mandate, what can’t he get away with?

But the mandate itself is anything but comical. If the federal government can force private employers to have you be vaxxed or be fired, they can also ban legal gun owners from jobs and demand employees receive “critical race theory” training. Democrats have embraced a new theory of government with no limiting principle but one—they will do what they want to you.

For the first time in U.S. history, the White House is interfering with the private medical decisions of more than 100 million Americans, in many cases forcing vaccination against their will. Federal workers who refuse to get vaccinated will first receive counseling and ultimately face termination if they continue to object. Private companies that don’t bow to the Biden machine, meanwhile, could be fined nearly $14,000 per violation.

Democrats have already declared racism a “public health crisis.” If President Biden can play the role of supreme leader with vaccines, what is the limiting principle that prevents him from doing so for mandated “critical race theory” trainings? Or gun-free work zones? Or gun owner-free work zones, for that matter?

With each passing mandate, liberal Democrats know what they’re doing. They also know how quickly the tides can turn, given how aghast Democrats were about the Texas abortion law.  Hopefully, that’s a wake-up call for them: A government powerful enough to impose your will upon others is also powerful enough to impose its will upon you when the levers of power, inevitably, turn.

Will Americans stand up for their rights and peacefully protest Biden’s blatant government overreach or stand idly by and watch as their freedoms are slowly but surely stripped away? 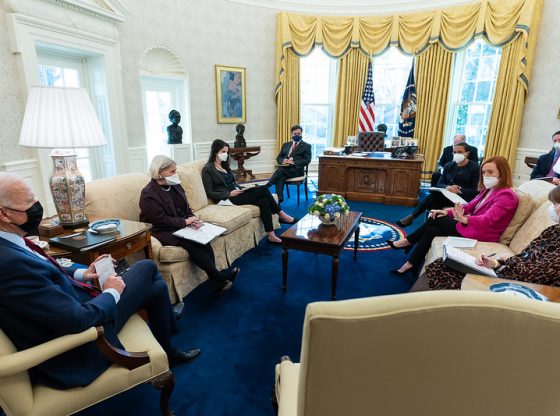 “Very dark future” indeed!! If they get by with this, WHAT’s going to stop them from demanding certain groups of people they don’t like be Done Away with by forcing them to accept medical practices that’ll kill them??!! I strongly suspect this is going on already in some nursing homes!

These are 2 pay checks 78367 and 87367. that i received in last 2 months. I am very happy that i can make thousands in my part time and now i am enjoying my life… employmentjobs01.tk

the only one who has the sole right and power to ‘interfere’ in my medical decisions is ME….I decide and no one else, not my husband, not my son, not my siblings and definitely not any imbecile who is sitting in the WH….