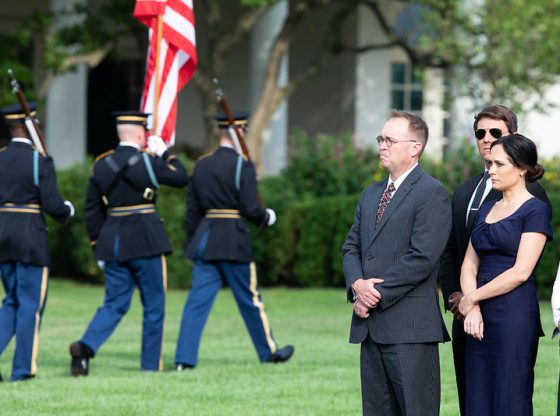 Ohio Congressional candidate Max Miller is suing his ex-girlfriend and former White House press secretary Stephanie Grisham for defamation. Grisham recently published an expose on her time in the Trump administration where she claims her relationship with Miller turned abusive at the end.

“I told the first lady that he got physical with me,” she said. “She asked me if I had called the police and I said no, explaining that this close to the election, it wouldn’t be good to have yet another domestic abuse scandal hanging over the administration. I also had no proof. She nodded and did not push the matter further. As far as I know, she told no one.”

She ended up telling Donald Trump himself the same, and her takeaway from all this was that “the president and first lady seemed totally unfazed about whether there was an abuser — another abuser — in their workplace.”

“A thorough and independent investigation will not only confirm that Ms. Grisham has ‘no proof’ to corroborate her allegations against Mr. Miller as she preemptively conceded in her article that was published in the Washington Post this morning, but will also establish that she has made false allegations against him in retaliation for him breaking her heart by ending their relationship and subsequently becoming engaged to Emily Moreno,” [Miller’s attorney Larry] Zukerman said.

Trump has already endorsed Miller for Congress. At the time Miller announced he is running to challenge Republican Rep. Anthony Gonzalez, who voted to impeach Trump. However, Rep. Gonzalez has since announced he will not seek re-election.

Miller isn’t the only one to claim Grisham’s new book isn’t based on the truth. Steve Scalise also slammed the former chief of staff to the first lady for lying about a visit to the White House shortly after he was shot.

I’m good with anyone that will sue the White House scum bag rodents.

I agree the Biden’s current admin administration overflows with them. Strat with the AG who wants to punish Mom’s for demanding accountability for teaching RACIM in public schools. The Secretary of defense who is more concerned with Political purity within the ranks than military readiness. The secretary of State and the minions in the State department who had his mitts in the Afghanistan withdrawal fiasco. The lying sack of manure that can never give a honest answer to ant question she is asked as press secretary and is constantly promising to circle back with a answer that never arrives.
That’s a good start..

Criminals just keep coming out of the woodwork like roaches surrounding the Democrats and Bidens.

Why does Mediaite say that the Trump ‘seemed totally unfazed’? Obviously a demo trying to throw a negative comment about our President and the First Lady! I don’t believe it for a second! They are very compassionate people, especially when it comes to abuse. I’m so sick of demos and their lies!

did democrats, Soros pay her to turn on Miller? why wait to break this ‘earth shattering’ news? broken heart, empty bank account or is she mad that Miller is engaged to someone else….between men and women, women are very vindictive….sorry but being a female, I don’t ‘believe all women’ and Miller’s election is coming up….

How much us she getting from the scumbag democrats?! Another run of bullshit smearing to cheat another election!

I THINK THE RIGHT NEEDS TO START FOCUSING ON SAFE HOUSES AND AN
UNDERGROUND RAILROAD.
THE NAT’L SOCIALISTS AND MARXISTS CONTINUE THEIR POWER GRABS.
SOON, THE NEW ‘WOKE’ MILITARY WILL BE PATROLLING YOUR NEIGHBORHOODS. THEY WILL BE LOOKING FOR PARTY DISSENTERS, AND TO REMOVE YOUR CHILDREN, SENDING THEM TO ‘EDUCATION CENTERS’ HUNDREDS OF MILES AWAY FOR THEIR PROTECTION. YOU WILL BE ALLOWED TO VISIT THEM WITH A WRITTEN PERMISSION SLIP.
THE BIG QUESTION IS: ARE WE ‘WOKE’ ENOUGH TO FINALLY JUST NOT NO,
BUT HELL NO, AND TAKE THE ACTION NECESSARY TO STOP THIS DISEASE IN
IT’S TRACKS. YES, THEY ARE GERMS.
CAPITALISM WORKS – SOCIALISM (FOR) SLACKS !

Grishon was a failure in her positions and is angry she was replaced. They call that SOUR GRAPES! It’s obvious she’s making up stories to sound dramatic and sell books. She’s a mess.