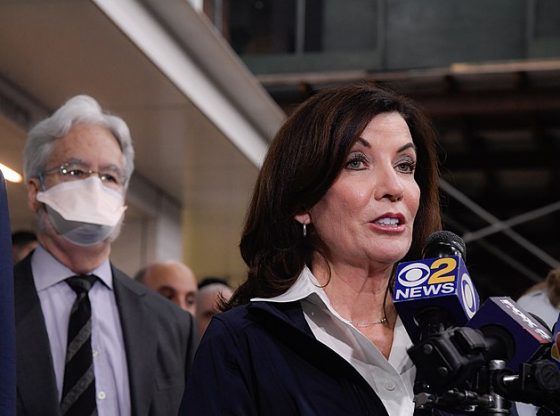 According to a new bill signed by Democrat Gov. Kathy Hochul of New York, art museums in the state are now required by law to disclose artworks looted by Nazis during the Holocaust through plaques.

At least 600,000 pieces of art were looted from Jewish people before and during World War II, according to experts. Some of that plunder wound up in the world’s great museums.

New York Gov. Kathy Hochul signed a law in August requiring museums to put up signs identifying pieces looted by the Nazis from 1933 through 1945.

The new rule comes as many museums in the U.S. and Europe are also reckoning with collections that contain numerous objects looted from Asia, Africa and other places during centuries of colonialism.

It isn’t clear how many pieces of art now on display will wind up being labeled as Nazi loot, and disagreements have already arisen over certain artworks with a complicated history.

“People should be aware of the terrible cost to people during World War II as these confiscations took place, and how these peoples’ treasures that they loved and had been in their families, had been torn from them at the same time their lives were disrupted,” the museum’s deputy director Andrea Baye said.

It really seems like the left wing democrats get more loony by the day. They must sit around and say to themselves, what can I do today that will create the most disruption and anger the republicans. Unless we can purge all democrats from our governments, at all levels, county through federal, they will end up destroying our constitutional republic.

Why label the art as stolen by the Nazis instead of returning it to the families? Of course many of those families were murdered by the Nazis.