In North Dakota, Shannon Brandt has been arrested for running over an 18-year-old Cayler Ellingson with his car, claiming Ellingson was “part of a Republican extremist group and that he was afraid they were ‘coming to get him.’” Brandt was then quickly released on a $50,000 bond, according to a Fox News report.

After visiting the scene where the incident happened, deputies went to Brandt’s house in Glenfield, ND, which is about 12 minutes from the crash scene. Brandt admitted to consuming alcohol before the incident, and stated he hit Ellingson with his car because he had a political argument with him. Brandt also admitted to deputies that he initially left the crash scene, then returned to call 911, but left again before deputies could arrive.

Brandt has been charged with vehicular homicide and drunk driving.

Assuming everything in this report is accurate, and Brandt is convicted of  “chasing” and running down Ellingson, this is almost certainly the result His Fraudulency Joe Biden and the corporate media have sought with their relentless demonization of Republicans. We’re a danger to democracy, they say. We’re evil extremists.

Just this week, a Harvard CAPS-Harris Poll found that the dehumanization campaign launched by Biden and the corporate media has resulted in 73 percent of Democrats living with the insane belief that “there are tens of millions of dangerous MAGA Republicans backing violence and trying to overthrow the constitution.”

Anyone who watched the Black Lives Matter/Antifa riots over the last few years or is aware of the dozens of vandalized and firebombed pregnancy centers knows that most of the political violence in America (and the world) comes from the left. There are countless unstable Democrats in this country. And so, when you have the United States president and billions of corporate media dollars focused on portraying everyday Americans as terrorists, unstable Democrats will naturally become even more unstable in the certainty of violent righteousness.

They fear what they deem is good for the goose is also good for the gander. And payback is a bxxxh. That is not the same as Good returning evil for evil. That is not the way of the good. That is old testament eye for an eye. We just want this mess fixed and to never happen again. The commie demon c rats need to go. They bring the plague. Nothing personal but we need to survive.

“That is old testament eye for an eye.” That is misunderstood — it was their way of saying let the punishment fit the crime — no more than an eye for an eye, i.e., it was against vengeance.

Put your tin foil hat back on.

THAT is the truth. Obama is a documented communist who said he wanted to ‘fundamentally change America’.

i agree with you Americafirst…. Barry is behind it all….with Soros , Schwab, and goodness knows how many other demons.

Time for justice to be done…

Americafirst, I very much agree, 👍

BIDEN should be charged

How so and on which law?

Either we have a Bill of Rights or we don’t. Do you believe in it from an exegetical viewpoint? I hope so.

We all knew that this would happen. The mentality deficient left would act in this manner. However, we must find the correct attorneys that can push back in the correct manner and when the mentally and academically deficient left step out of the law or the judge does the same; They Must Be Called Out and the Venue must be Changed. This is going to take vigilance and tenacity to make sure that the case is tried within the bounds of the law. Doc

JoeBarry Obiden is guilty as sin.

Sort of get the impression that this is what Biden wanted when he delivered the blood red speech in Philly?

For the true conservatives here, please keep in mind that while we believe Biden’s and other socialist Democrats’ rhetoric is responsible for this and worse, if we want to see Biden personally charged, THEN in all honesty we’d have to accept our Pres. Trump being falsely charged with orchestrating the January 6th “INSURRECTION”.

The vehicular homicide charge is so ridiculous. This was premeditated murder. The democommunists are a cancer on our republican nation.

the blood is on the POS in the WH the violent left will stop at nothing to hurt anyone of opposite party. this is communism 101

Brandon is complicit to this murder. Inciting murder is illegal.

That family should sue Joseph Biden and his administration for as much as possible.
These crazy demtards need to pay with every penny they have.

This boy should be OUR Poster boy, he was murdered in cold blood because Hitl…I mean, Biden, told his cultist followers to kill anyone Conservative/Republican!!!

IT WAS A BLATANT CALL FOR ARMS!!!!
Anyone who thinks otherwise is living in a fantasy world. Biden wants us dead and he will do and say everything he can to make it happen. He is the scum of the earth.

This is the beginning of Civil War.2 and they fired the first shot, what are we going to do to save ourselves and our Country from these murderers, rapists, racists and ignorant a*sholes?????

Brandt did this horrible act of running down a young man intentionally and he should be punished. If it were reversed and it was a liberal democrat who was killed all hell would pay. I am sick and tired of these liberals getting away with EVERYTHING including MURDER! We all have the right to pick what political party we want to support. It’s not up to some drunken jerk to take it upon himself to take the life away from another. Brandt could have got in his vehicle and drove away, his excuse about Cayler Ellingson calling others to gang up on him was totally lame. The poor kid was calling his Mom to come and get him, it’s a shame she couldn’t get there in time. My sincere condolences to Cayler’s family. I hope justice prevails for your son’s murder. By all rights it should. Many prayers that it will, I know it won’t bring Cayler back but this ugly, disgusting lunatic should lose everything he has for being a heartless selfish piece of trash to murder in cold blood a person who disagrees with him.

We must remain peaceful. Don’t give these people an excuse to come after us. They appear to be looking for an excuse to lock us away.

This another result of the Democrats and Media unaccountable POISON they spew out day in and day out! The Left gets away with incitement of violence without so much as a hand smack?
I cannot comprehend HOW anyone in this Nation that’s paying attention even slightly can support this party of evil liars determined to destroy our Constitutional Republic…
The Real Virus In America are the Democrat Party

This fearmongering from the President has influenced people to act in an undemocratic was against those they claim to be “Fascist MAGA voters and supporters”. The ones who claim Republican and Donald Trump voters to be the dangerous “Fascists” are themselves the same who support the Democrats for a Communist American Dictatorship for the USSA 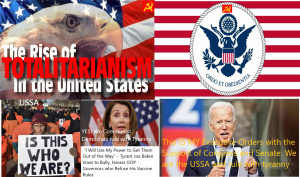 I for one am shockED. Trump’s rhetoric, when ever he spoke, was decisive, evil an inspired violence beyond our imagination. Brandon speak ill of the GOP and Trump, a young man is killed over it and guess what? The lame stream media either does not report it like they do for Trump or downplays it. If people in this nation vote for democrats then you can not cure stupid, stupid is fooooooooooor eeeeeeeeeever

Add in all the fentanyl deaths because of his open borders.