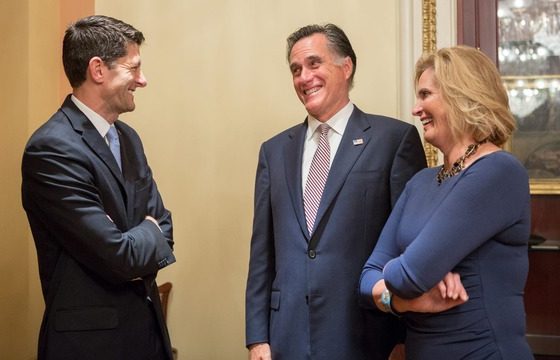 Speaker Paul Ryan with Governor Mitt Romney of Massachusetts and his wife, Ann Romney. The Romneys visited the U.S. House of Representatives to view Speaker Ryan's election and assumption of office. Via Wikimedia Commons.
| By: Peter Vargas| Politics | 9905 | 27 comments
Advertisement
HELP This Republican Rockstar Save LIBERTY [Click Here to ACT]

Ex-House Speaker Paul Ryan, a failed vice presidential contender, bashed President Trump in a recent appearance on Teneo’s Insight Series. He said, “We all know he’s so much more likely to lose the White House than anybody else running for president on our side of the aisle, so why would we want to go with that?” Ryan claimed Trump is only powerful because “everybody’s afraid of him.”

“He only remains where he is because everbody’s afraid of him. They’re afraid of him going after them, hurting their ambition, but as soon as you get the herd mentality going, it’s unstoppable,” he said.

Ryan said regardless of Trump’s decision on a 2024 run, he will not be the party’s nominee.

“Whether he runs or not, I don’t really know if it matters, he’s not going to be the nominee, I think,” he said.

In other parts of Ryan’s sit down with Kevin Kajiwara, Ryan described Trump as a weakness for the Republican Party, dubbing him the Democratic Party’s best “weapon” in the upcoming midterm elections. He also accused the former president of trying to “intimidate” other Republican candidates into not running in the next presidential election.

“He’s going to try and intimidate people out of the race as long as he can,” he continued, adding no one wants to be the first to throw their hat into the ring as they could earn the “ire” of Trump and “MAGA voters.”

Paul Ryan was the worst Speaker, nothing got done with him. He is Democrat deep inside.

I thought that was what the primary was for, to pick which candidate the PEOPLE want to run for their president? The Republican party should support the People’s candidate and it looks like that will be Donald Trump…AND unless the Democrats cheat horribly again like in 2020 Trump will win AGAIN!!

Paul Ryan is just a traitor to his own party. Hopefully the Republican Party now knows who they can trust or be loyal to our true Americans and citizens. Once they take control of congress they need to remove or vote all Rinos eg Paul Ryan, Liz Cheney, Mitt Romney, etc, out of Republican Party
Vet

We remember Paul Ryan. Didn’t he leave the House as speaker because he couldn’t advance in anything, was involved with wine for a time, then after he left was speaker and adviser for the dems at FOX, went topsy turvey with all the conservatives the dems wanted to get rid of was a Rino, FOX tost there interest in Ryan because he didn’t know when or where he wanted to go or who to vote for, sort of like the picture in this article of he and Romney. Never trust a democrat or someone that doesn’t know if he is one. I think they take Obama classes on this. Ryan was a dem for years in sheeps clothing. One of the first to increase his retirement fast and furious. Thanks to Soros, eh?

I used to love Paul Ryan and his conservative views. But I would never support him again now.

That’s right you lousy Dem with an “R” after his name. MAGA
FJB
FPR

These rinos have to go! Let’s wipe ’em all out!

If we get control of more state congresses we should think about a Constitutional Convention and make what they have done with their lies pay with prison time and forbid a two tier justice system like we have.

That way we can swat down the criminalities like opening the border and lying about it, spending like they are a total drunk, shutting off the most successful national resource we have, that has made the entire world better off, getting rid of lifetime gov careers like being an aid then running for Congress, then becoming a lobbyist, then going to work in the deep state like in the Pentagon or a hundred other places and at the same time becoming hard far left, hating America. I’m not sure why that happens but it should be prevented. At the same time the Ds would want a convention and would do it in a minute if most of the states were democrat bodies. It’s hard to gain the kind of control the Rs are going to have, already have on a state level. The Ds will never have it without cheating a lot because most of what they know is a failed system from the dark past of many dictatorships. Idiots….and it’s just for their personal riches and power. So incredibly stupid.

I have no understanding of what else they are after and why they would be so willing to destroy the greatest country ever on the planet. Instead they just corrupt it more and more for the same cheap reasons, disgusting.

Since I’m talking to myself here, goodnite!

Let’s bring this to a boil. The former speaker you’re referring to is none other than a former George Soros employee. He’s not only a Rino but a traitor to his original party but every American out there, all 360 million of us. Screw him and I hope people from Wisc. run him out of the state. Don’t care where he moves to, Hungary perhaps?

There are two A-HOLES for ya.

Paul Ryan is the TRUE DEFINITION OF RINO…he sold out the Real Republicans when he was Speaker sucking up to Pelosi. THIS MAN IS A HYPOCRITE!

Hypocrtite does not adequately describe Ryan. He should be tarred and feathered.

But let’s face it, the Republicans are not noted for picking strong leaders in the Congress. Instead, they are noted for pissing away elections because they have no guts. Most of them are just “present for pay”.

Sad Ryan let us down!! He ran away instead of of choosing to support to a great President.

Why is anyone giving RINO Ryan an audience. Just look at the crowd he hangs with. He certainly hits it off well with Romney, another backstabbing RINO. Time will tell what happens in 2024. Thankfully it ain’t up to Ryan!

Listening to Ryan’s thoughts reminds me of our tasks at hand. First, retake the House and the Senate. Secondly, we need to ensure that all the RINOS get primaried next time around. There’s definitely a big difference between being a consort with the enemy and being a moderate. What we need is a “RINO LIST”.

Paul Ryan should never have been put in the Speaker’s seat. But the Republicans have a knack of picking losers for important positions in the House and Senate. Just think Mitch McConnell and Keven McCarthy.

I won’t even mention that sorry RINO Romney.

Paul Ryan and Mitt Romney are both RINOS. They should hook up with fellow RINO Liz Cheney and take it on the road as the “3 Stooges”.

As a Wisconsinite, I can’t stand that SOB and he should move just over the state line into Illinois where he’d be welcomed with open arms. Rat faced bastard!

Total scumbag. He and Liz Chaney should form their own political party. GOP hates them; Dems won’t take them.

I am an independent voter who has more concern about democrats than Trump. Now I know why Trump had such a hard time when he was president too many RINO’s and he was not able to drain the swamp.

Just a LOSER running his mouth!! If he knew what he was talking about, he wouldn’t be OUT-OF-OFFICE right now!!

You sir are a true Wisconsin loser and!!!!

I was involved in the team to unseat rino ryan….ran into some ardent supporters of his but it was only a matter of time and he knew people were waking up and rejecting him… he didn’t leave to spend time with his kids !

Actually Paul Ryan is correct on every point. Trump is great on most policy issues, especially his failure to be taken in by the “man-made global warming” hoax. However, he is narcissistic, egotistical, superficial and vindictive, often causing splits among Republicans that are harmful to the party as a whole.

Most critically, Trump could have won re-election handily, thus sparing us all of the horrors of the current Biden fiascos, if he had just acted a bit more Presidential and had resisted the temptation to fire off a lot of stupid tweets, making enemies where he didn’t have to do so.

It’s easy to dump on Paul Ryan by calling him a “loser,” yet n point of fact he participated in 11 elections and won 10 of them. This is afar better record than that of Donald Trump. And Ryan’s “loss” in 2012 was not his fault – it was purely due to Mitt Romney’s decision in October 2012 to play patty cake with Obama rather than calling Obama out for the fraud that he was. In the second debate, Romney took the fight to Obama, and his poll numbers surged, The Romney-Ryan ticket was absolutely on track to win at that point. Then Romney projected weakness in the last debate, and the opportunity slipped away.