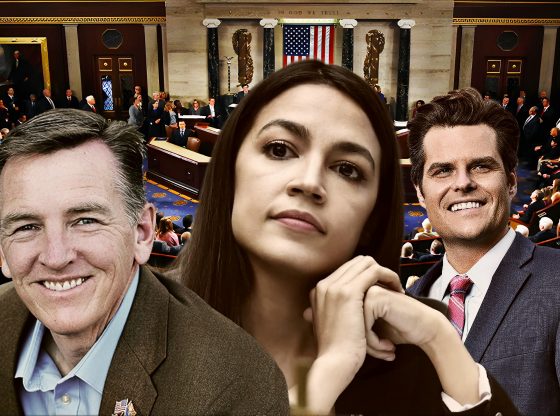 Many would assume that (D-NY) Rep. Alexandria Ocasio-Cortez and (R-AZ) Rep. Paul Gosar most likely couldn’t see past their political differences when face-to-face with one another. However, the Bernie Sanders’ style Dem-Soc AOC and the further-than-average right-wing Gosar were seen chatting during the House vote for the next Speaker of the House. 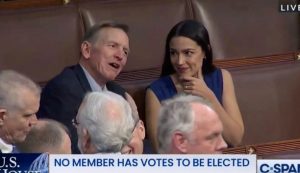 The scene here appears to be very light-hearted. It’s not impossible to assume that after three votes in a day, all of which resulted in nearly the exact same outcome, that eventually both AOC and Gosar got bored and killed some time by having a conversation.

In Nov. 2021, AOC and Paul Gosar were in a heated argument on Twitter due to a video posted by Gosar’s “creative team,” which featured an edit of AOC’s face pasted onto a character in an anime.

So while I was en route to Glasgow, a creepy member I work with who fundraises for Neo-Nazi groups shared a fantasy video of him killing me

And he’ll face no consequences bc @GOPLeader cheers him on with excuses.

When commenting about a Tweet that featured a cartoon, AOC was not only outraged, additionally, Rep. Ted Lieu called Gosar’s Tweet “sick behavior.” However, Rep. Lieu is frequently overdramatic and is often the first to Tweet about any social cause or controversy that he can leech onto.

When the camera pans over to AOC later on, there appears to be an obvious change in tone when AOC comes face-to-face with (R-FL) Rep. Matt Gaetz. AOC’s tone appears to be much more combative, however, Gaetz quickly brushes her off.

What happened here? Can anyone read lips? pic.twitter.com/r7PR3Srcyg