Jacksonville.com is reporting that former Congresswoman Corrine Brown was convicted on 18 or 22 accounts. The mainstream media is largely ignoring this story.

A jury convicted former U.S. Rep. Corrine Brown today of financial crimes that could put her in prison for years, potentially the rest of her life.

The verdict came three days after closing arguments in a trial where Brown was painted as living the high life on cash that aides secretly deposited in her bank account after passing it through other accounts.

Jurors were told the brash 70-year-old Democratic icon, who spent 24 years in Congress before losing reelection last year, received $141,000 in untraceable cash over several years through sources including the sham charity One Door for Education and her Friends of Corrine Brown campaign committee.

An FBI accountant testified Brown, who earned around $175,000 a year as a member of Congress with a pension from the Florida Legislature, spent an average of $1,438 per month more than her reported income. 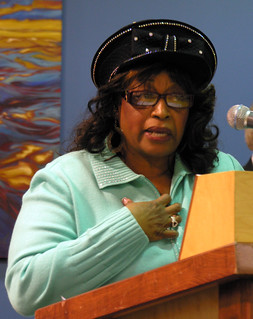 Fox News dug a bit deeper into her scheme:

The indictment came after an investigation into the charity One Door for Education Foundation Inc., which federal prosecutors say was purported to give scholarships to poor students but instead filled the coffers of Brown and her associates.

Earlier this year, One Door President Carla Wiley pleaded guilty to one count of conspiracy to commit wire fraud after it as determined that she had deposited $800,000 into the foundation’s account over four years. Over that time, federal prosecutors say it gave one scholarship for $1,000 and that Wiley transferred herself tens of thousands of dollars.

“Congresswoman Brown and her chief of staff are alleged to have used the congresswoman’s official position to solicit over $800,000 in donations to a supposed charitable organization, only to use that organization as a personal slush fund,” Assistant U.S. Attorney General Leslie Caldwell, chief of the Justice Department’s criminal division, said in a statement earlier this year.

Why isn’t this all over the news you might ask? Look no further than the “D” behind her name. If this was a Republican there would be wall-to-wall coverage

Gov. Abbott Says He Will…

These Sanctuary Cities and States…

Turnout for Trump in New…