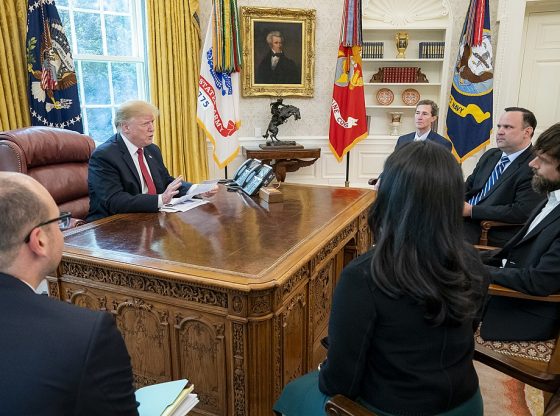 Trump’s Returning to Social Media With His Own Platform

“The new platform is going to be big,” Miller added.

He did not provide concrete details of the new platform but said that the former President has been having “high-powered” meetings down in Mar-a-Lago about the new project.

Would you join a Trump-owned social media platform? Let us know in the comments.

Biden’s Secretary of State Anthony Blinken embarrassed the United States during a meeting with China’s top diplomat Yang Jiechi. A delegation from the two countries is currently meeting in Alaska, and supposedly the outcome of the meeting will be a major determinant of when President Biden will meet with Xi Jinping. However, China absolutely blasted Blinken during an exchange leaving the U.S. looking weak and embarrassed.

The Twitter overlords are coming back to censor yet another conservative lawmaker. This time the social media platform has targeted GOP Rep. Marjorie Taylor Greene by locking her out of her account for 12 hours.

This comes on the heels of news that Bongino’s show The Dan Bongino Show just hit its 100th radio station affiliate milestone earlier this month.

However, with the announcement Bongino is taking over Limbaugh’s coveted 1 to 3 pm time slot for Westwood One, he will now be in nearly every media market in the United States.

Brooks, 66, will be appearing Monday evening alongside former President Trump’s Senior Advisor and speechwriter Stephen Miller to make this announcement.

Former Fox News talking head and 90’s actress Stacey Dash is changing her tune on politics after having left the network.

In an interview with the Daily Mail, Dash said that on Fox News she was “the angry, conservative, Black woman.”

“And at that time in my life it was who I was,” she continued.

Dash said her role at Fox News was to stir up political controversy.

I don’t need to wait 100 days to judge Joe Biden’s presidency. We already know exactly where he stands. President Biden, Senate Majority Leader Chuck Schumer, and House Speaker Nancy Pelosi have made their socialist agenda clear. In the first 50 days, the Democrats took extreme positions and steps to federalize our elections, defund the police, and create a crisis at our border.

Democrats have made clear their desire to transform our nation into a liberal utopia. The Democrats’ first legislative priority for the 117th Congress was to pass H.R. 1, which would federalize elections and use taxpayer dollars to match donations and publicly finance partisan campaigns.