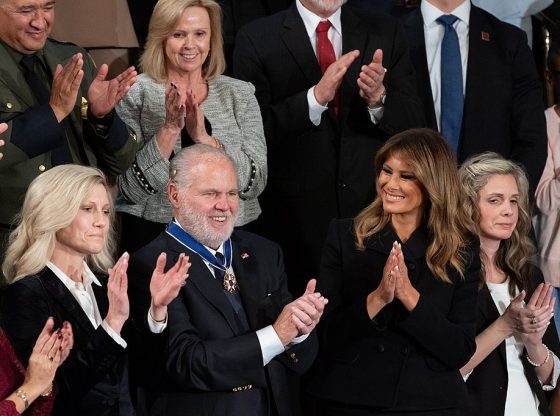 Late conservative radio icon Rush Limbaugh’s replacements have finally been revealed. Clay Travis and Buck Sexton have been selected and will take over the three-hour time slot held by Limbaugh. The new show called “The Clay Travis & Buck Sexton Show” is scheduled to begin airing on June 21.

Buck Sexton is a radio host and political commentator who previously served as an officer with the Central Intelligence Agency and a New York Police Department counterterrorism expert. He currently broadcasts a three-hour weekday evening talk show, “The Buck Sexton Show” and is a regular guest on Fox News as a national security analyst.

Needless to say, I could not be more excited, @ClayTravis and I are going to do a great show together

Get ready for it, America 🇺🇸 https://t.co/xKQLGOOipw

Clay Travis is a sports journalist, lawyer, TV analyst, and founder of the sports website Outkick.com. Since 2016 he’s hosted “Outkick the Coverage With Clay Travis” on Fox radio.

Big news: I’ll be joining @BuckSexton in Rush Limbaugh’s 12-3 et radio time slot starting June 21st. I can’t wait to get rolling. Tomorrow will be my final day of @outkick AM sports radio. Here’s how I made the decision: https://t.co/YlXz0pXk7x

“We’re not going to replace Rush Limbaugh, we’re going to have an evolution of the show with fresh voices—those that grew up on Rush and admired him,” said Julie Talbott, president of iHeartMedia Inc.’s IHRT +2.13%Premiere Networks.

“Rush’s connection with his audience is one of the primary legacies of his show,” Mr. Travis said. “I also think Buck and I have the unique ability to offer a perspective that many people in their 20s and 30s are desperate to hear.”

“The most dominant talk radio hosts have been from one generation; Clay and I represent the next phase. We’re going to bring the perspective of two guys who see a country they’re deeply worried about, and a massive audience that needs people who will speak for them,” he said.

Premiere Networks will shop the new program to affiliate stations and expects it to be broadcast on hundreds of stations across the country. The new program will also be available as a podcast on iHeartRadio.

I’m not criticizing these two men at all, I just thought I had heard that Dan Bongino was going to taking the reins for Rush.

Dan took a job during the same timeslot on another station, after Rush passed. I don’t believe he was meant to replace Rush on Rush’s station.

That’s what we all thought as well.

Obviously no one can replace or be Rush. However, I’m excited and hope they bring in new,younger listeners. Best of luck to both.

Banging has a territory (for lack of a better word)
But, not all the stations. The way I’m understanding this, is certain people will fill some stations. Like I said, my understanding of this.

Does this mean the Rush Legacy part of the show is going away? I’m not sure I will be able to listen in if Rush has no involvement. Will they be changing the introductory music as well? No one can really replace Rush anyway.

Rush is not involved other than as a reference,he is deceased.

The “Rush Legacy Show” which featured three of the usual fill in guests for Rush was on the IHeart network (which is apparently who is producing this new show with Buck and Clay. I’m betting that they will not continue the same format as they used with the three other guys (with frequent Rush recordings). They will not be on the same stations in many markets. Personally I kinda liked that three man rotation which sort of continued Rush’s modus operandi. But I hope the new guys and Bongino both do well.

Who can really replace Rush? Those are tall boots to fill.

Of course let’s all wish them success. Everyone knows that the Maharushi is monolithic and cannot be replaced. And to honor Rush’s spirit, we will NEVER GIVE UP!

Personally I was pulling for and wishing for either Jason Lewis or JD Hayworth, one of Rush’s favorites. But obviously the “powers that be” didn’t care enough to poll Rush’s audience and let the most votes win…I believe this decision was made too fast, but what do I know…I was just one of the 20,000,000 loyal listeners.

Dan Bongino is on Fox Nation from Noon
til 3:00 PM, daily.

what??? I thought it was Dan Bongino’s time slot—who the heck is Clay
Travis? never heard of him–will it be liberal and conservative? that would be
a mistake and nothing Rush would have approved–I am confused to say the
least!!!

If they are going to rotate then Mark Steyn should be a host–he filled in for Rush
the most and he is awesome!!! There will never be another Rush for sure–I miss
him as I am sure most of his audience does—-GOAT

I;m sorry they didn’t put the BEST relief player Mark Stein in that slot. He is the most recognized of all replacements when Rush wasn’t there. I don’t think I’ll be tuning in very often.

No one can ever replace Rush.
Although, Good Luck