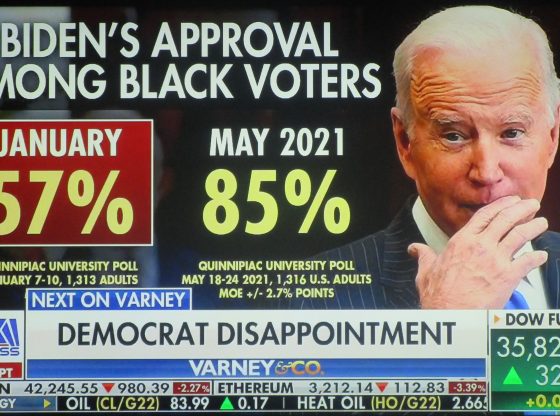 As the one-year mark of Joe Biden’s presidency approaches, his poll numbers should make him weep.

According to a January 12 Quinnipiac University survey of 1,313 adults, Biden’s job approval is an anemic 33 percent; 53 percent of respondents disapprove of Biden’s performance. (One week earlier, a CNBC poll had Biden’s disapproval at 56 percent.)

Biden has the support of 57 percent of blacks, down from 85 percent in a May Quinnipiac study; 27 percent of blacks disapprove of Biden’s job. This is an abysmal showing among the Democrat Party’s most loyal voters.

Hispanics are saying “No, gracias” to Biden. His approval is at 28 percent to 51 percent who disapprove. The keystone of the new majority that Democrats have tried to build appears to have fallen out and rolled away.

Independents, also knows as swing voters, are screaming, “Let’s go, Brandon!” Just 25 percent of this indispensable group of citizens back Biden; 57 percent have turned their thumbs down on America’s 46th president.

This could spell horrible news for Democrats in general. A Gallup survey just found that in 2021’s first quarter, 49 percent of Americans identified as or leaned Democrat, while 40 percent were pro-Republican. By the fourth quarter, those numbers had flipped; 42 percent saw themselves Democrats, while 47 percent considered themselves fully or largely GOP. This is the highest level of public support for the Grand Old Party since 1995.

If Biden is steering toward re-election, he will not get there with these dismal numbers. They reveal deep and wide dissatisfaction with Bidenflation, the virtually erased US-Mexico “border,” the Afghanistan catastrophe, record-breaking murders in at least 16 Democrat-run cities, the supply-chain crisis, Biden’s inability to “shut down the virus,” as confirmed by the 1,483,656 new C-19 cases recorded on January 10 alone.

The White House brags that average hourly wages grew in 2021 by 4.7 percent. Great news! Alas, annual inflation is running at 6.8 percent, which means Americans wages are underwater by 2.1 percent, after growing in real terms under President Trump. Real weekly earnings increased a robust 3.4 percent under Trump in 2019, before COVID-19 wrecked everything. Even in 2020, amid the global pandemic, inflation-adjusted earnings grew 1.6 percent. Bidenflation is shrinking wages. At least by this measure, Americans were better off when the Chinese germs were running rampant on Trump’s watch. That is, before COVID ran rampant under Biden’s “leadership.”

Atop these doomsday numbers, the far-Left is starting to jump ship. Consider these comments about Biden from Corbin Trent, former communications director for Congresswoman Alexandria Ocasio-Cortez (D – New York), the darling of the new, neo-Marxist Democrat Party:

“He’s deeply unpopular. He’s old as shit. He’s largely been ineffective, unless we’re counting judges or whatever the hell inside-baseball scorecard we’re using. And I think he’ll probably get demolished in the midterms…People will smell opportunity, and D.C. is filled with people who want to be president.”

As the Left abandons Joe Biden, his numbers will continue to slump, and his failing presidency will slide between the waves off Rehoboth Beach.

The Lilly Ledbetter Cover-up will take down Joe Biden! President Trump you need to know! Email me for PDF.

Trump knows that Wayne Norris Ward is a fool.

Really, they are in the least worried. They have backing from the Judicial, Legislative, and Big Tech. wokers. Only God can turn this dilemma around. God help us!

Which God?
The Moses God?
The Christ God?
Then Mohamed God?
The God Damn God?

Anyone still supporting this train wreck needs their heads examined.
Who today doesn’t see what’s going on???
Must have blinders on???

I see that everyday gets worse for Trump.
I see that his Supreme Court Nominees are ignoring him.
I see that there are more and more Rinos everyday.
(That is what Trumpkins call life long Republicans, to be a true Trumpkin you have to have been a registered Democrat that made generous donations to the Clintons.)
That kind of blinders!

What are the true numbers?
Do numbers confuse Trumpers?

Does anyone wonder why democrats can care less about his poll number? Be ready. It looks to easy

Did you care about Trump’s poll numbers?
Biden’s are higher.
Trump’s average approval rating, as President was 41.1%,
Biden’s average approval rating, as President, is 49%
Biden peaked at 53%.
Trump peaked at 49%.
It looked so easy in 2020.
It was easy to get Trump out of the White House.
Just put him up against Sleepy Old Joe.