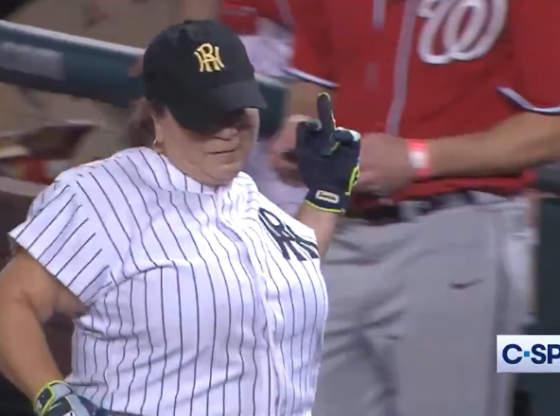 Democrat Rep. Linda Sanchez (CA) flipped off the Republican dugout as she jogged by them Thursday night during the congressional baseball game. Screenshot via C-SPAN.
| By: TTN Staff| Politics | 10715 | 20 comments
Advertisement
SAVE the REPUBLIC and Help Stop Pelosi [ACT NOW]

Sanchez’ vulgar gesture comes five years after a left-wing terrorist tried to assassinate Republican lawmakers at one of the practices leading up the game. The terrorist shot five people, including Rep. Steve Scalise (R-LA), but fortunately the only person who was killed was the terrorist.

“5 years ago my colleagues & I were attacked playing baseball—because we’re Republicans,” Scalise wrote on Twitter. “We didn’t let it stop us then & nothing will stop us now. It’s been a long journey, but tonight we play the Congressional Baseball Game—5 years stronger.”

Sen. Rand Paul (R-KY) said during a 2018 interview that the media largely ignored a key detail from attack, that the terrorist was yelling “this is for healthcare!” while he was shooting. “He also had a list of conservative legislators, Republicans, in his pocket that he was willing to kill,” Paul added.

Democrat Rep. Linda Sanchez (CA) flips off the Republican dug out. Her team got blown out 10-0.pic.twitter.com/CgPOaEsLs4

How much money would that pig fetch at the tallow plant?

This is the first time i have heard the democrats assassin was killing people in the name of healthcare. HEALTH CARE!?

Just another low quality Demonrat showing just how low they really are. Trash is as trash does.

My sister-in-law is trash, that “Representative” is lower than trash. In fact, I’m sure that she/xhe and her team had a giggle over how brilliant her action was. I’m sure that she doesn’t have to worry about a sniper because he wouldn’t know what shoot at!

The final would have been different if a Democrat was the score keeper.

But the score would change at 3Am

I guess vulgarity has joined abortion and gay sex as the sacraments of the new “democrat” religion. (Democrat in quotes, because these people are not democrats – the real democrat party died in the ashes of the 1968 Chicago convention riots. The folks who have co-opted the name of the party are in reality 13th century European “nobility”, who think that because of their noble birth they’re entitled to run our lives).

You misspelled “RUIN” our lives!

What an ignorant fat piece of $hit!

Typical. California Dem politicians only care about themselves. They certainly don’t care a hoot about the people they are supposed to represent. They are radical Leftist, tax and spend, self entitled losers with no class. They take after the Governor. Just another reason why so many Californians are jumping ship.

I just hope it’s only the CONSERVATIVES that are leaving commiefornication!

The leftists need to stay and live in their llttle leftist “UTOPIA”.

What a first class “ lady ?” Hope all her constituents viewed this brat!

Looks like she needs to hit the new gym more that congress approved on.

10-0 Republicans wins. They better get used to it; a lot what November is going to look like.

10-0 ! Lets hope they are just as incompetent when the bullets start to fly.

Wonder how many of her own party she has eaten. They do eat their own you know.

THAT shows how mature the left is. They just can’t stand being CIVIL to those who have different believes than theirs. They are so immature and childish!

that fat c*** is a disgrace to her race.