The President wrote, “Alexandria Ocasio-Cortez, who some call AOC for short, is again running for Congress, NY-14, and I am thrilled to give her my Endorsement. Even though every one of her ideas, such as the Green New Deal, are terrible and would be a disaster for America, AOC is a great addition to Congress.”

Referencing the popular “Blonde AOC” memes, the former president then advised the congresswoman to dye her hair a lighter shade.

“We need a few more AOCs in Congress, if we’re being completely honest. Many people are saying that she should consider going blonde, and after seeing that picture, I have to agree. Take it from me, Alexandria, blondes have more fun!” he concluded.

The … president specifically calling Ocasio-Cortez by her nickname, AOC, aimed to mock a previous statement she made in 2020, implying that Republicans are sexist if they do not call her by her full name.

Previously, AOC was triggered by the nickname:

I wonder if Republicans understand how much they advertise their disrespect of women in debates when they consistently call women members of Congress by nicknames or first names while using titles & last names when referring to men of = stature. Women notice. It conveys a lot.

AOC is a name given to me by community & the people. Y’all can call me AOC. Government colleagues referring to each other in a public or professional context (aka who don’t know me like that) should refer to their peers as ‘Congresswoman,’ ‘Representative,’ etc. Basic respect 101.

Hey, AOC respect is earned, not given.

It’s impossible to take this nit-wit seriously. She shows the maturity of a four year old. I can’t believe serious people voted for her? However. it is Democrat district.

The democrats have controlled New York for a long time, and the destruction they have done, as well as screwing the citizens of that state, is a national shame. AOC fits right in with the other stooges there. It sure doesn’t say much for the intelligence of the voters there since they elected and then reelected her. They could start helping to clean up the federal government by dumping her as their rep this November.

The democrat party has been absolutely brilliant. Their policies don’t work, and most don’t even make sense. What they have done which is brilliant is to get democrats to stop voting on “right versus wrong” and only vote “right versus left”……..And they have taught hate….they should be proud. I just recently spoke to a long time staunch democrat, and he was angry about Trump, and hated him with every ounce of his being for what he said was Trump’s attempt to steal his vote on Jan 6th. I said that he was also angry because he believed that others had stolen his vote. So I then asked him what he hated Trump for before January 6th. He didn’t know what to say, as he had just had “Trump Hate” drilled into his head since 2015, the day Trump announced his run for the presidency. The entire democrat party, and much of the republican party were terrified when he swore to “Drain the Swamp” in Washington, as that was a direct attack on the career, do nothing politicians, who mainly only cared about their re-election and political and financial gain. And with the media being the 4th of the 5 branches of government, (the DOJ being the 5th), not one good thing done by Trump was ever reported.

AOC is nothing more than a MORONIC LUNATIC IDIOT! 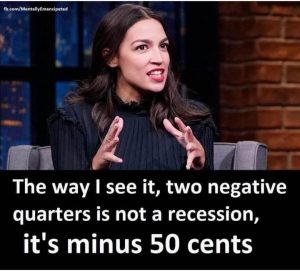 I call her “Sandy.” A short name for someone SHORT on accomplishments!

She should be called a Whore much more fitting for her…

So, A O C, seems there have been plenty of times when you openly showed NO RESPECT for ” colleagues who are on the “other side “. However, since yo are an ignorant demoRAT, that’s ok, right?

AOC is a nut job! She thinks she is relevant, NOT! Hope she gets voted out, she has NO place in our congress, nor do her pals “ the squad”! Lame jokes, all of them! But papa Soros bought them in, but WE can remove her, send her back to the bar where she belongs. What a waste of breath! She is too ignorant to know she is one stupid “ B”!

YOU’RE RIGHT JIM. I’M A FIRM BELIEVER IN RESPECT IS EARNED NOT GIVEN FREELY. AND SHE’S PROOF. SHE WAS GIVEN RESPECT BEFORE WE KNEW HER DOMESTIC TERRORIST SUPPORTING ANTI-AMERICAN BELIEVES AND BEHAVIOR AND LOOK HOW THAT ENDED. SHE SPENDS HER DAYS AND NIGHTS NOT WORKING FOR HER VOTERS. BUT SPEWING BRAINWASHING IDEAS OF FICTION ON HER LAPTOP AND PHONE. SHE SPENDS HER DAYS PRETENDING TO CARE AND PRETENDING TO BE ARRESTED. AFTER SOMEONE TOLD HER SHE CAN’T MOVE ON IN HER CAREER IF SHE WAS. THEN IT SUDDENLY WAS A HOAX. AND WORSE. SHE IS SOOOOO IMMATURE AND DISRESPECTFUL IT KILLS ME. BEFORE WE EVEN HAD THE ELECTION COUPED. AOC WAS SPEWING “FIRST WE TAKE THE ELECTION THEN THEN WE ROUND UP THOSE THAT DIDN’T VOTE OUR WAY AND DEPROGRAM THEM”. AKA, BRAINWASH. PLEASE TELL HER THAT UNLIKE DEMS, THE IDIOTS THAT LOOK FOR THE LETTER D TO DECIDE WHO TO VOTE FOR. WE AREN’T EASILY LEAD OR TRICKED. WE WILL NOT BE DEPROGRAMMED. OR SHOULD I SAY WE WILL NOT BE PROGRAMMED TO GIVE UP OUR FREEDOMS, LIBERTIES AND SPEECH. ONCE BIDEN IS GONE SO HIS THE CORRUPT DEMS ABUSE OF THE ENGLISH LANGUAGE AND DICTIONARY. AND ONCE WE GET BIDEN OUT SHE AND HER ANTI-AMERICANS CAN FOLLOW. CAUSE I REFUSE TO RAPE THE PLANET FOR THEIR FANTASY DREAM OF LIVING THE STAR TREK, STAR WARS LIFE IN THEIR LIFE TIME. THERE’S A REASON WHY ALL THE SHOWS PREDICT IT WON’T HAPPENING IN OUR LIFE TIMES. CAUSE THE ENERGY REASONING DOESN’T EXIST YET. THE PEOPLE WHO CREATED IN ACCORDING TO STAR TREK ARE NOT BORN YET. AND WORSE. WITH DEMS WANTING TO KILL AMERICAN BABIES IN THE WOMB. WHO’S TO SAY THE KID WILL BE BORN. AND WORSE. WITH DEMS LITERALLY AND PHYSICALLY INDOCTRINATING OUR KIDS STUPID. AKA, WOKE. THERE’S LITTLE CHANCE WE WILL SEE THE REALITY ANY TIME SOON. DEMS HAVE THRU THEIR CHINESE PROPAGANDA, HATE AMERICAN INDOCTRINATION PROGRAM THEY HAVE BEEN WORKING OVER THE PAST COUPLE OF DECADES. THEY HAVE LITERALLY PUT THE AMERICAN STUDENT IN A BOX, LEFT BEHIND FROM BEING THE TOP LEARNERS #1 TO #34. AND DON’T GET ME GOING ABOUT THE DEMS NEED TO KILL OFF AMERICANS WITH DEADLY PATHOGENS AND DISEASES WE NO LONGER VAX FOR CAUSE THEY FEEL THEY NEED ALL THESE SOCIALIST ESCAPING ILLEGAL INVADERS LIKE THEY CAN CONTROL THEM BETTER. WRONG. ALL THEY ARE DOING IS IMPORTING CRIME. BUT THEN AGAIN THAT WAS THEIR PROGRAM FOR US TOO. GET RID OF THE ONE PERSON THAT CAN HURT THEM BESIDES TRUMP. A POLICE OFFICER AND A JAIL CELL. REMEMBER OUR LEGAL SYSTEM WORKED LIKE A WELL OILED MACHINED UNTIL DEMS DECIDED TO REFORM IT WITH LET ALL CRIMINALS FREE. TURN THE NATION INTO THE WILD WEST CAUSE THEY THINK IT WILL GET US TO GIVE UP OUR GUNS. CAUSE IT’S THE LAW ABIDING CITIZEN WHO IS THE PROBLEM NOT THE ILLEGAL CRIMINAL WITH THE ILLEGAL GUN. NOW THE LAW ABIDING PERSON THEY CAN’T CONTROL IS THE PROBLEM. WE NEED TRUMP BACK TO DRAIN THE SWAMP AND REBUILD OUR LEGAL SYSTEM. CAUSE OMG. IT JUST CAME OUT THAT DEMS CORRUPTED THE FBI BUT PUTTING “LAWYERS” IN THE UPPER POSITIONS. YOU KNOW LIKE COMIE AND WRAY.CORRUPT DEM LAWYERS ARE DESTROYING OUR NATION.

Love President Trumps humor and you know AOC is stressing and has hit the “Vino Roja” hard!

The more we tweak liberals and posture like we’re the big winners, the more we incite them and while that can be rewarding in the short run, I’m not sure it’s productive in the long run.

Okay, we’ll call you by your real name, Sandy Cortez. That’s who you were (and are) before you decided to try to ruin this country. You shouldn’t complain about being called AOC. There are far worse names we could call you and they’d all be true.

At lest she was a good bar tender