Despite Trump Not Being on Ballot, he Looms Large

Home /Politics/Despite Trump Not Being on Ballot, he Looms Large

Despite Trump Not Being on Ballot, he Looms Large 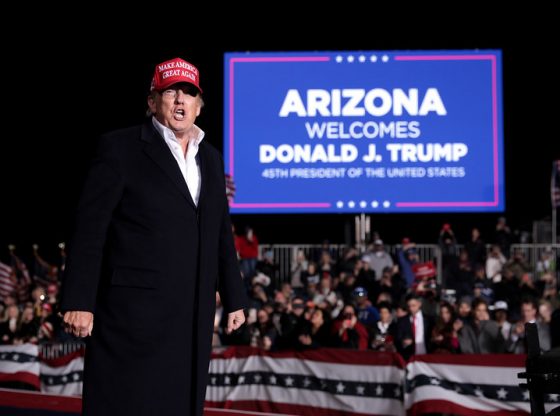 Despite Trump not being on the ballot in the 2022 Midterm Elections, he still looms large as the face of the Republican Party. According to a New York Times investigation, about 70% of GOP candidates running for Congress have questioned Joe Biden’s legitimacy. Despite not living in the White House anymore, Trump still dominates political coverage, especially recently with the January 6 hearings.

According to John Garris, per POLITICO:

“The usual journalistic crutch when assessing political legacies is ‘for better or worse,’ but in this case it is only for worse. Trump’s historic significance flows from how effectively he has made people doubt what was previously beyond doubt — that American democracy is on the level — and how brilliantly he has illuminated just how much this generation of Americans looks at one another with mutual contempt and mutual incomprehension.

“Here is the great paradox of the Jan. 6 panel. Its inquiry has systematically dismantled Trump’s deceptions and denialism surrounding the 2020 election. At the same time, it has helped build Trump into something much larger than he appeared two years ago. He is a political leader too serious to forget.”

The publication notes, “But even if he didn’t appear in a single ad — and there are plenty that include him — Trump still looms over everything in politics.”

Many Trump-endorsed candidates in tough races are ahead in the polls, including Kari Lake, running got Arizona governor, former state Attorney General Adam Laxalt, running for U.S. Senate in Nevada, among many others. Now, as November 8th — Election Day — fast approaches, voters will decide whether the GOP flips the U.S. House and Senate and takes back control in governorship races across the country.

Sure, he makes a lot of noise and has lots ot followers at rallies, but if you watched the J6 Committee show on TV, it sure looks like Trump is guilty of treason, for sure. Then there is the Mir-a-Lago debacle and the NY AG lawsuit.. Fat Donny doesn’t stand a chance this time. Ole expression—-“The harder they behave, the harder they fal”.

THE AMERICAN COMMUNIST PARTY HAS GOT FULL CONTROL OF THE
DEMOCRAT PARTY OF AMERICA.
ONCE COMMUNISTS HAVE CONTROL THEY DO GIVE IT UP WITHOUT A
BLOODY FIGHT.
IF THERE IS AN ELECTION IN NOV., WHICH I DOUBT, AND THE REPIBLICANS
DO TAKE BACK THE COUNTRY, DON’T BE SURPRISED THAT TRUMP HAS AN
ASSASSINATION ATTEMPT ON HIS LIFE AND / OR FAMILY.

Shame for the Americans to try the run in Venezuela’s direction. Shame to place and believe in all those lies the corrupt Democrats are trying to spread with the even more corrupt media.