Following Elon Musk’s takeover of Twitter, 45th President Donald J. Trump broke his silence on the deal. He wrote on Truth Social about Musk’s Twitter overhaul, saying he is “very happy” for the Tesla billionaire. Trump owns Truth Social, which is a new social media platform to fight back against attacks on free speech. Musk is attempting a similar endeavor with Twitter after censorship has gone out-of-control.

The 45th President wrote, “TRUTH SOCIAL has become somewhat of a phenomena. Last week it had bigger numbers than all other platforms, including TikTok, Twitter, Facebook, and the rest. It also looks and works better to my eye.”

He continued, “I am very happy that Twitter is now in sane hands, and will no longer be run by Radical Left Lunatics and Maniacs that truly hate our country. Twitter must now work hard to rid itself of all of the bots and fake accounts that have hurt it so badly. It will be much smaller, but better. I LOVE TRUTH!”

Musk has criticized Twitter’s content moderation and permanent user bans under the platforms past ownership and specifically said “it was not correct to ban Donald Trump.”

Twitter locked an account associated with Trump’s campaign in the lead up to the 2020 election and then locked Trump’s personal account on Jan. 6, 2021 until he deleted multiple tweets. One of the tweets was a video message in which Trump called for people who had stormed the U.S. Capitol that day to go home, while also reiterating his dispute of the election results.

On Jan. 8, 2021, Twitter permanently suspended Trump’s account after he tweeted, “The 75,000,000 great American Patriots who voted for me, AMERICA FIRST, and MAKE AMERICA GREAT AGAIN, will have a GIANT VOICE long into the future. They will not be disrespected or treated unfairly in any way, shape or form!!!” and “To all of those who have asked, I will not be going to the Inauguration on January 20th.”

Musk has now fired many key Twitter staff, including the CEO, CFO, and those responsible for the Trump ban. Trump is likely to have his official Twitter account restored soon.

Congratulations Elon Musk. Being in Australia I can not go on Truth Social…So it is Twitter or FB. Have already been banned by Fb for a couple of months at one time for my anti abortion, anti socialist stand.

Use a vpn.. Use Avast VPN

Plenty of people on FB with anti-abortion and anti-socialist stands, and don’t get banned. What made you different?

Way to Go Elon, Hope all goes well with your new venture.

DEAR PARENTS,
When do you say enough is enough
of destroying your kids lives?
The democrats want us to live in their Fairytale world, all untrueths…..
Why do we want to be a Slave to the democratic party.
Do you want to be ruled by the people who want to disfigure your childs genitals?
They want to replace the truth with Fairytales…….when they disfigure your child,
it can never grow back. Parents, if you allow this to happen to your child, it will be your fault.
If anything happens later in their lives pertaining to this disfigurement. You allowed it!!
We have to unit with the blood of all American.
We all have the red blood of man kind. With that
we are all the same. The politicians are trying to keep
us apart. This makes easier split us up.The more we separate
the easier it is to make us all ther Slaves.
Fighting for freedom is something we need to do.
We are asking if this flag fly underneath
Oh glory. We as Americans can prevail if we stand
together with all colors of humanity. We are Americas.
Not the politicians that lie to us, and they make more
Money on killing babies. Yes and get the kids to chang there
Gender. When they grow and realize what happed.
They will be Obama,George Soros and Bidens Youth.
What can we do about it??? If we unit with the blood, we can prevail.
Join us if want freedom For All . 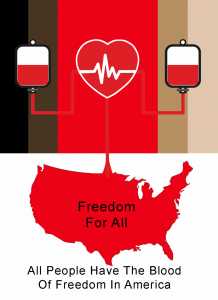 It’s nice to see two platforms allowing Americans to share their views without the prejudice and mendacity of the left. America’s values, history, and the United States Constitution do not support socialism, the agenda of the left, or the nonsense of bowing recklessly to massive climate control projects that wreck our economy and destroy our way of life – spending billions; the only effect and intention are to control and push for globalization. These projects are not valid and are pushed by people who are not in favor of individual freedom.

Maybe they will let me back on. I was for reinstating Trump`s policies finishing the border wall letting the Keystone pipeline oil flow. What is needed is a plant in Vancouver, Washington for the west coast.

Should have had Trump do the firings…

Hopefully this is the beginning of our country returning to sanity and common sense.

Trump: One of the very few elected officials that ever wanted to pursue TRUTH.