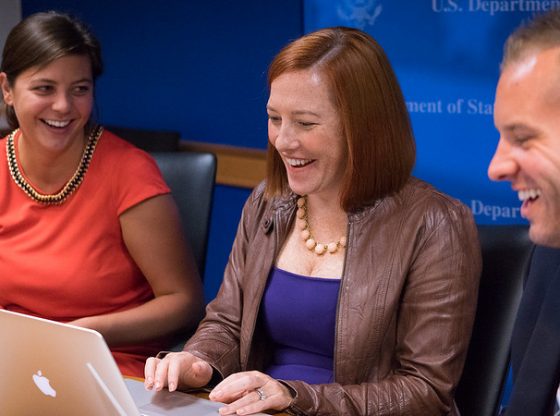 On Friday, ex-White House Press Secretary Jen Psaki made a prediction about what Democrats are thinking ahead of the election. While appearing on MSNBC’s show “Morning Joe,” she said Democrats are “kind of worried” going into the final days of the election. Polls show a GOP surge after Democrats’ abortion message appears to have peaked far too early. This early peak gave Republicans an in to talk about crime, the economy, and other topics impacting voters ahead of the November 8 election.

Meanwhile a Trafalgar Group/Convention of States Action poll found 58.9% of respondents believe a Democrat-controlled Congress would hurt the economy compared to 41.1% who think it would improve the economy.

“People are fearful about where the momentum is going in some of these races. Yes, there are very encouraging signs like the record early vote numbers, but numbers in some of the House races are not where they should be. People are trying to get – a lot of people I talk to are worried about voters being encouraged and excited about people at the top of the ticket and maybe not excited enough to vote for the congressional candidates and that’s a real concern.”

“I think it’s a reflection of the fact that Democrats are kind of worried about where this is going right now and it’s felt worse over the last week or so. You know, we only have 11 days to go here. That’s why I think you see Barack Obama, Joe Biden, all these people out on the trail, because they’re trying to light a fire with Democrats right now.”

Psaki isn’t alone in expressing concern about the outcome of the elections. Senate Majority Leader Chuck Schumer was caught on a hot mic Thursday saying that one seat was “in danger” although it remains unclear which seat he was referring to. Schumer did however seem pleased about Pennsylvania Democratic Senate candidate John Fetterman’s Tuesday night debate, saying, “looks like the debate didn’t hurt us too much in Pennsylvania.”

Races are tightening in states that could mean the majority for either party, such as Pennsylvania, Nevada, Ohio, New Hampshire, among others.

She’s a bigger Liar than Biden.

Schumer needs to put down the crack pipe. Old “Upchuck” is obviously (purposely?) missing the articles stating that after the debate (butt kicking), independents are turning to Oz in droves in PA. Bet there’s more than a few Dems who are going to vote for him too.Hopefully, that’s enough to counter the 225K ballots the Dims mailed out to newly registered, unproven voters.