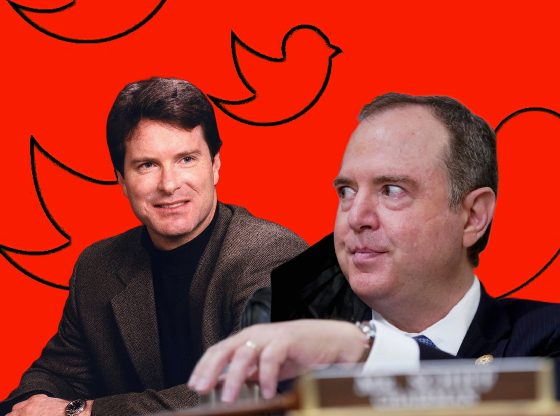 Paul Sperry, a reporter for Real Clear Investigations and a NY Post columnist, is alleging that Democrat Rep. Adam Schiff violated his First Amendment rights, and personally attempted to have Sperry removed from Twitter. Sperry tweeted, “This is the oath @AdamSchiff violated: – “I do solemnly swear that I will support and defend the Constitution [incl the First Amendment]; that I will bear true faith and allegiance to the same; that I take this obligation freely without any mental reservation or purpose of evasion””

This is the oath @AdamSchiff violated:
“I do solemnly swear that I will support and defend the Constitution [incl the First Amendment]; that I will bear true faith and allegiance to the same; that I take this obligation freely without any mental reservation or purpose of evasion"

Sperry, in a separate Tweet, would go on to add, “This is the oath @AdamSchiff violated: “I do solemnly swear that I will support and defend the Constitution [incl the First Amendment]; that I will bear true faith and allegiance to the same; that I take this obligation freely without any mental reservation or purpose of evasion“‘

In an information dump, one of the many Twitter files, emails were released through Substack journalist Matt Tabbi’s Twitter account to the public from Rep. Adam Schiff and his office, showing that he and his office attempted to personally meddle with who Twitter allows having a voice and who he believes shouldn’t be allowed First Amendment rights. Even going as far as to attack individual Twitter accounts, and not just types of content such as “QAnon,” “Jan. 6” etc. 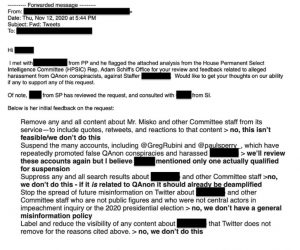 A Twitter employee responded to the email saying, “no, this isn’t feasible/we don’t do that.”

Schiff’s office also asked for suspension of “the many accounts, including @GregRubini and @paulsperry_, which have repeatedly promoted false QAnon conspiracies and harassed”

Schiff would likely be opposed to a whistleblower having access to Twitter, as in 2019, Sperry cast doubts about the impeachment process, alleging that the process was not organic. While this Representative spread many unverified theories himself, such as Russiagate, other Trump-Russia alleged connections, the Nunes Memo, and conspiracies about Hillary Clinton’s election not being fair. However, “QAnon” and other media buzzwords made him and his office feel threatened enough to contact Twitter and attempt to meddle with the media’s ability to report on the news.

While writing for the New York Post, Sperry explains:

In articles for RealClearInvestigations, I outed his anonymous “whistleblower” from the first impeachment of President Trump. It was Eric Ciaramella, a Democrat who had worked in the Trump White House as an Obama holdover. I also exposed Ciaramella’s prior relationship with one of Schiff’s top staffers on the impeachment committee, Sean Misko.

My reporting cast fresh doubts on Schiff’s claims that the 2019 impeachment process happened organically. The New York Times had already busted Schiff lying about prior contacts with the whistleblower. Initially, Schiff publicly stated his office never spoke with the whistleblower before he filed his complaint against President Trump, when in fact a Schiff staffer had huddled with him, something Schiff’s spokesman Patrick Boland was forced to admit after the Times broke the story. (The staffer was never identified.) The prior contacts led to suspicions Schiff’s office helped the whistleblower craft his complaint as part of a partisan operation.

In the censorship demands Schiff’s office sent Twitter, Misko and the “impeachment inquiry” are mentioned. It’s not clear if Ciaramella is, too, since some names are blacked out. Schiff demanded Twitter “remove any and all content”’ related to them.

Schiff knew better. He knew “QAnon” was a trigger for Twitter censors, who were suppressing QAnon posts. Yet even Twitter’s liberal gatekeepers appeared skeptical of Schiff’s claims: “If it is related to QAnon it should already be deamplified.” (Emphasis in original.)

Of course, when questioned Adam Shieff went on the newest left-wing go-to, saying, “the events of January 6″ whilst alleging that Sperry’s stories and stories like it “result in actual violence.” However, one could argue that elected officials shouldn’t be participating in things of this nature because throughout history overzealous censorship and lying from elected officials is enough to turn the country’s citizens against their government.

At the time Schiff went after Sperry, Sperry had amassed a following of over 340,000 followers on Twitter. As a result of Schiff’s vendetta, Sperry has lost followers and notoriety after having to rebuild his following and engagement.