Last week, more classified documents from when Joe Biden was serving as Vice President under Barack Obama were discovered being carelessly stored in the garage of his home, next to his Corvette. At the time, one document was said to have been found, however, it was uncovered that the initial reporting from the White House was not true, and there was a total of six classified documents in the garage of Biden’s home in Wilmington, Delaware.

However, the story goes further. As a result of the discovery of the classified documents, one of the files on Hunter Biden’s notorious laptop were released as well. According to the document from “ApplyCheck,” a Background Screening Request, the address that the documents were found in the garage of appears to have also been the previous address of Hunter Biden, who was being charged a whopping nearly $50,000.

Either Joe Biden is the greediest landlord in the world, or, Hunter Biden didn’t get the family price to rent his own father’s home – as a typical cost to rent a house in Wilmington, Delaware is typically in the single-digit thousands, and certainly nowhere near $50,000. Leading many to wonder – why would Hunter be charged so much and willingly pay that amount?

In 2018 Hunter Biden claimed he owned the house where Joe Biden kept classified documents alongside his Corvette in the garage Via @jj_talking pic.twitter.com/L7c80MRRiS 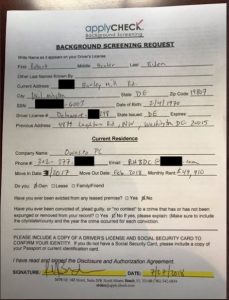 Former deputy assistant to former President Donald Trump, Sebastian Gorka, expressed doubt Hunter Biden could afford to pay his father nearly $50,000 a month, and other Twitter users have speculated the alleged payment could have been a way for Hunter Biden to funnel money to his father.

House Republicans are set to investigate Joe Biden for his alleged involvement in Hunter Biden’s foreign business deals. When he was vice president, Joe Biden frequently appeared on the sidelines of his son’s business affairs, including with Ukrainian, Chinese and Kazakhstani businessmen.

The House Oversight Committee also sent a letter to the White House on Friday questioning whether Hunter Biden had access to the classified documents discovered at the Delaware residence.

“The Committee is concerned President Biden stored classified documents at the same location his son resided while engaging in international business deals with adversaries of the United States,” the letter read, Reuters reported.

Joe Biden’s lawyers discovered classified documents at the Delaware residence Dec. 20, before finding more Wednesday and Thursday, according to Biden’s special counsel. The first batch of classified documents were discovered at the Penn Biden Center, a think tank where Biden held a private office, days before the midterm elections in November. (RELATED: Five Additional Pages Of Classified Documents Found At Biden’s Delaware Home)

Former President Donald Trump has also weighed in, and now that the story has been able to mature and no debunking evidence has been released, it appears that questions should be raised that the necessity of a nearly $50,000 cost of rent for Hunter Biden. Of course, this isn’t a penthouse in New York City or a home in Los Angeles, this is a home in Wilmington, Delaware, where the average cost of living is right in line with the rest of the United States, and rent prices are nowhere near the tens-of-thousands of dollars per month price point.