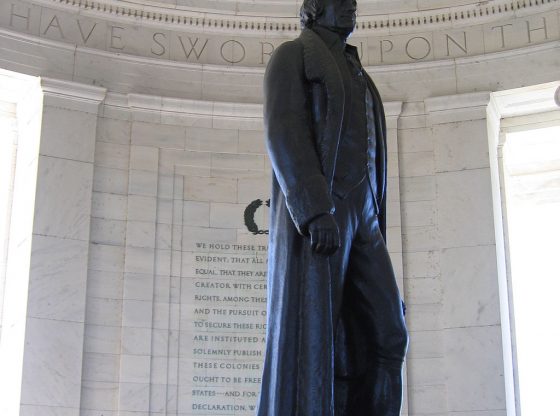 Thomas Jefferson statue via Wikimedia Commons
| By: Sally Kent| Your America | 4020 | 29 comments
Advertisement
Liberty is Under ATTACK and Your Help is Needed! ACT NOW!

A statue of Thomas Jefferson was packed up and removed from New York’s city hall after the city’s mayoral commission voted to remove the statue because the nation’s third president owned slaves.

The 187-year-old figure of the man who wrote the Declaration of Independence was unceremoniously taken out through the back door.

It is reportedly on a long-term loan to the New York Historical Society.

The statue was banished from the chamber because it fails to represent contemporary values, said I. Daneek Miller, the co-chairman of the City Council’s Black, Latino, and Asian Caucus.

“Removing a monument without a public conversation about why it’s happening is useless,” said Erin Thompson, a professor at John Jay College of Criminal Justice. “New Yorkers all need to talk about who we want to honor and why.”

Well maybe they should research Joe Biden. He has family roots from one of his great great grandparents who owned a slave. Jim Crow himself, people need to research the history of our country, the Republican Party, and the Democrat Party was formed in opposition to the Republican Party by the KKK. So they are the racists, not us! America needs to wake up!

Abraham Lincoln freed the slaves and he was assassinated for doing so by a liberal actor…Democrat. His statues are being torn down. We cannot change history but we needn’t destroy our heritage for Maoist Marxists.

I got $97450 up to now this year working KJH on the online and I’m a full time student. I’AM profited. It’s really simple to know and I’m in order that cheerful that I got some answers regarding it.

Here what I do…. 𝐆𝐨𝐨𝐠𝐥𝐞𝐖𝐨𝐫𝐤𝟎𝟏.𝐓𝐤

In Jefferson’s time, slavery was practiced around the world. Nobody though it was wrong. England and one Scandinavian country abolished it in the late 1700’s. Jefferson was probably the smartest man to ever hold the presidency of the U.S. To judge a man from the 17 and 18 hundreds by today’s standards is nothing short of stupid. Can’t imagine how today’s society will be judged two or three hundred years from now. It won’t be pretty.

The Black Africans were sold into slavery by their Black Tribalism feudalism. Still going on today.

The founders of our country fought for our freedoms.They don’t represent who we are now.We are a country of whinny cry babies who get offended by everything and want to remove others rights to voice their own opinions. Idiots want to use today’s norms to judge how people lived in the past. Stupidity.

And MILLIONS do not even learn about our history. Most schools no longer teach about the wars and the holocaust. The reason is that the age-old saying—lessons not learned are bound to be repeated.

Time to dismantle Mt Rushmore, right? I guess we can leave Teddy and Abe but the other two dudes gotta go! Maybe we can replace them with that noted abolitionist, B. Obama and his buddy Xiden…

Mt Rushmore is staying or there will be a civil war.

O tempora, o mores! In other words, don’t judge man by standards that were in place centuries ago…

Totally stupid. Thomas. Jefferson had. A. Affair. With. A. Slave. But. Fathered. Children why. Remove. The. Stature ? Not. All. People. Were bad. If. They. Think. They. Can. Erase. History they. Are. Dead. Wrong. You. Cant. Erase. Time. Stupidity. is. The. Problem. Here. And. The. Scumbags. Are. Nothing. More. Then. Stupid. People

Isn’t that just what the Nazi’s tried to do and indoctrinate the school children?

You will not find slave ownership in my family bloodline. It’s possible some of my Irish Great Great Grandparents or their children were sold into slavery. I haven’t done a DNA check. My Father’s Grandparents were Farmer’s in Sicily, and lived off the land. My Mother’s grandparents were sheep Farmers and Fisherman in Norway and lived off the land. Both Grandparents came to USA in very early 20th Century with the shirts on their back. We come from humble stock.
Our roots are whatever they were. We cannot change the past. My hope is that all men, who were created equal, will learn to live with one another in peace and stay as one nation under God, indivisible with Liberty and Justice for all.

Absolute stupidity. Thomas Jefferson was a great man a proponent of individual rights and democracy. He was the man who motivated the colonists to break away from Britain and form a new nation. Our country probably wouldn’t be here if it wasn’t for Thomas Jefferson, the ones that behind making this decision to remove his statue are a bunch of imbeciles. The Marxist Demonrats need to try to study history before erasing it.

[Free Limited Offer] Earn up to $500+ Per Day Or More . Join Profit Formula Panel for free

A bit clunky to say the least but our skill set and experience won the day. Poor ref with no regard to offside and he bottled it on the sin bin, red card all day long if it had been on sky
see here>>>>

Miller needs to be removed from New York State. He is Racist, un-American

The liberal lowering of standards to pacify all indeed hurts all!

This is disgraceful! Thomas Jefferson is a part of our history. You people removing our history is
pathetic. Apparently we don’t have anyone to stand up with guts to these pathetic people.
Quit erasing our history!

This is a real shame
The world watches a Nation without heroes. It looks like the men who were our heroes were a bunch of crooks. Lincoln, Jefferson, Lee and others
The heroes now are Superman, Spider man and the saviors of the Universe
Judging people in the past we the present metrics is a sample of the poor education and poor principles

Communist cancelling culture. Losers demonstrating their hate for freedom, which is the foundation of the USA.

Just something for blacks to use as a crutch. My people, the Irish, were oppressed much more than any black slave, but do you here us whine about it? You want something to cry about, wait till socialism kicks in. It’s gonna make slavery look like mr Rogers neighborhood.

The guy that said the statue made him “uncomfortable” should have told to seek counseling.
And as to Washington and Jefferson owning slaves, I bet that in Virginia in the late 1700’s, you didn’t have political power otherwise. No Declaration, no victory over the British, no America.

Didn’t Trump call that one on statue removal. When the novel 1984 start coming true it’s time to hurt communists and their leash holders.

They should really check thru history, some blacks owned slaves.