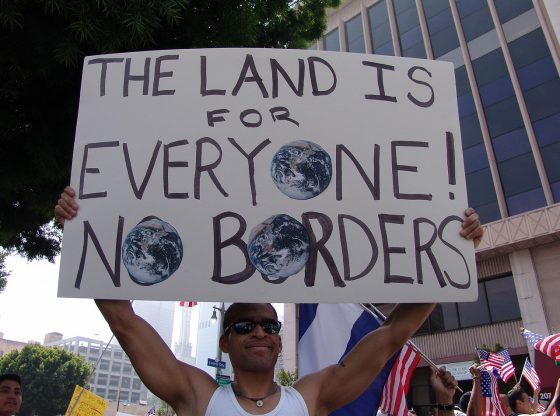 Immigration and Customs Enforcement officers say that President Biden has effectively abolished their ability to carry out their duties due to his implementation of wide-ranging restrictions. The news comes as ICE deportations hit record lows with only 2,962 being recorded last month.

ICE under President Biden is an agency on probation. The new administration has rejected calls from some Democrats to eliminate the agency entirely, but Biden has placed ICE deportation officers on a leash so tight that some say their work is being functionally abolished.

The cutback in ICE enforcement comes amid a surge in illegal immigration that the Biden administration has struggled to contain.

Illegal immigration has surged to a 20-year-high since Biden took office as many immigrants flocked to the U.S., hoping that the new president would be more lax toward border crossers than his predecessor. Some federal boarding facilities are now facing severe overcrowding because of the influx of illegal immigrants, many of which are unaccompanied minors.

The Biden administration has repeatedly attempted to shift the blame for the illegal immigration crisis on former President Trump.

The interlopers will go as far as they are allowed—-which seems everywhere!

And he is likely a Marxist illegal from some country inimical to us, hoing to see us DESTROYED, like all OUR SUPPOSED ALLIES AND EVEN OUR TOTALLY CORRUPT, UNCONSCINABLE FISCALLY AND ALL OTHER WAYS IRRESPONSIBLE AND UNACCOUNTABLE CAREER CRIMINAL CONGRESS AND COURTS;ALL OF WHOM OUGHT TO BE IN PRSION OR WORSE FOR ACTS OF SEDITION AND HIGH TREASON AND THE GENERATION OF $22 TRILLiON IN FURTHER DEBT FROM THE ELECTION OF THE TRAITOR IN CHIEF IN 2008 UNTIL NOW! When the Day of Reckoning finally arrives, how many lunatic Leftist lice will be left alive after the DAMAGE they have done to our freedoms , choices assets, famiies and the futue of our children? NOT A SINGLE DAMNED ONE OF THESE SWAMP SLITHERING REPTILES AND VENOMOUS VERMIN, TREASONOUS TROLLS, I HOPE AND PRAY TO GOD ALMIGHTY:This though it be politically incorrect to even think in such fashion. Well THIS disabled Vietnam vet wth a 54 year old degree in GOVERNMENT has NEVER been politically correct and NEVER will be.Bet on it!
PERIOD!

When will the republicans start calling for a special counsel to investigate Joe and Hunter Biden’s collusion with the Chicoms? They influenced our elections in his favor and gave money to the Biden’s. Where’s the 3 year investigation like they did to Trump??? He’s obviously protecting the Chinese government by calling off the investigation into the Wuhan virus origin so there must be collusion, right?? The people need an investigation NOW!

RIGHT NOW – – – almost anything Republicans do is mostly wasted effort. However, mid-terms are coming. If people regain common sense and return Congress – both Houses – to a GOP majority (especially if RINOs are replaced with Constitutional conservatives) then Republicans will be in a position to DO something.

Great wish but they have not fixed the voting rules yet. Looks like the dumercrats will vote for us.

I pray that will happen !!

Why don’t you stop holding back and tell us what you REALLY think?
LOL! You are 100% correct!

AMEN brother, I’m also a Disabled Veteran, and i can not believe what is happening to our COUNTRY. God bless you for caring, we know the LEFT doesn’t !!

A special kind of a moron!

How do you know it’s a dude? Maybe he identifies as a woman? That could be sexist! (Sarcasm)

Sure. Try going to his country illegally and see how far you get

He and his fellow believers need to pay for them if they want them – put up or shut up – my family is DONE. We worked hard and have paid high taxes on every cent we have made and then some – and the tax burden on the 50% of America that pays taxes for the other 50%’s benefit is escalating daily.

Hamas has a fortune stashed in Swiss banks!

Actually the UN says Palestine receives one of the highest amounts of aid from countries. That is PLO territory. Guess Stooges like the Squad and BLM keep Hamas going.

Once Free
Reply to  Bobby

Beijing Biden and his puppeteer handlers have a plan, that plan ignores the Iranian terrorist regime that murdered our soldiers in the Iraq war with IED’s. They want to lift sanctions and give the Iranians the sponsors of world terrorism the power and money to build the atomic bomb. It is like the fact we now have rigged elections no one can question or request federal investigations into. We live in a dictatorship that ended our sovereignty by open borders to get more illegal votes, a federal government that weaponized federal agencies as weapons for the regime’s critics. Once HR1 passes rigged elections will be legalized by no voter ID required in person or mail in ballots. China like in the last election will print us the bogus ballots. What sits in the seats of power in Washington is a cancer to freedom and a pathway to enslave us under a Global leftest dictatorship forever. New Green Deal, who wants it, give us a vote on it, that is not rigged like our elections. No violence, but pray God help stop our illegal communist masters, stop their goal the destruction of the US.

AMEN, we need to help ISRAEL, our best ally.

Dude with the sign, Yeah, you. I am going to come live at your house. It is space on the land. I want it.

There you have it! It is all it is to it Daniel!

Biden should be arrested for Treason. Everything he does hurts our country.

Biden is only the mouth. Obummer is the leader. This is his third term. Why do you think he has his White House only 2 blocks from the real White House? Nothing happened during Trumps term that Obummer did not know at the time it occurred.

Welcome to the United Socialist Republic formerly known as the United States of America. I guess you didn’t realize that you elected a Socialist government last November soon to invite Communists to join the ranks. You asked for it, and you finally there. Free stuff for all who demand it at the expense of the average working American. Talk about shameful – this is the Biden goal – Socialism.

ICE should do their job of deporting criminal illegals, as they always have and tell hidenbiden where to stick it. He has no business stoppng them from their job, No one should listen to this mentally challenged senile,frail,old fool,puppet who nothing but an empty suit, with no common sense. This embarrassment, needs to be thrown out of office for total incompetency, the laughing stock of the world. A pushover for our adversaries.

ICE and every facet of this country plus the military – can do nothing without POTUS approval for he IS the head of the country and Commander In Chief.

HE IS A POS CHIEF

Unfortunately he is not the one giving orders. My bet is George Soros. Soros has control of a lot of globalists. Judicial Watch found out our State Department’s USAID section was sending millions of American taxpayer dollars to Soros’ Open Society world wide. You have to know that Trump didn’t OK it.

I think ICE should send them back where they came from. Dems wouldn’t know, as none of them give a rip about visiting the border. They wouldn’t know any better.

True Americans With thehelp of then lord Jesus Crist Kick the Communist Left New World Order Out Of America.

This admin is breaking the law…when will someone file another suit ???

GOP HAS NO BALLS

Won’t help. The SCOTUS traitors will prevent any results of it .Money talks s..t walks. All took place while voters allowed it by voting the people in. All democracies in history have failed because the people kept wanting free stuff while a very few payed for it.

The Democrats in office today are the Very Bottom of life – Killing Our country and way of life – Hope the Fools that voted for them are Happy !!!!!

FOOLS!?!? A girl from my high school class – she normally votes GOP – she told me that for four years she regretted voting for Trump. He is so abrasive and arrogant, don’t you know. This time, she voted for Biden and was “proud” that she did. IT IS VERY HARD TO DEAL WITH THAT KIND OF STUPIDITY AND IGNORANCE.

You can’t reason with stupid for sure

Biden is an inept fool. May Satan take you sooner than later

Biden proves again daily that he is an anti-American president. One only hopes he does not go down in history as the one who finally destroyed the nation, because he is working at it. I never thought I would see a president worse than Carter. Then Obama came along and set the new standard. Now Biden is even worse.

and don’t forget Camel Eye Hawrace is acting like SHE is prez elect.

LET UP IS A TOTAL JERK=OFF

BIDEN HAS BEEN A LOSER FOR 47 YEARS…….WHAT MAKES YOU THINK IT’S ANY DIFFERENT NOW???

PLEEEEEEEEEESE! Someone remove that old brain dead corpse from our White House…NOW! He is destroying our Nation, our Worldwide Reputation, and our American lives. WTH are the American people thinking by leaving biddyboy in office when he is there illegally. EVERYONE KNOWS THE 2020 ELECTION WAS A SHAM TO OUST DJT AND PUT THAT WEAK OLD DUFFUS IN HIS PLACE!

We are going to lose our Country to those billionaire groups who love POWER AND CONTROL! How stupid are we Americans to lay down and let those maggots use us as their door mats?

Dems knew Trump was going to win so they came up with their cheating scheme. They had to cheat because too many people were leaving the Dem party and voting for Trump and they could see the contrast in the campaigns. Did we ever see more than 15 people at a Biden rally?! He’s a dud and what’s scary is the world knows. Oh Lord we need our president back!!!

Again Obummer is enacting the things he said he would do while running for president but the republicans control in the House and Senate prevented it. Now the shoe is on the other foot thanks to the poorly informed voters. Susan Rice is popping the whip for Obummer. Obummer and Soreass are the leaders now.

BIDEN IS THE MORON CAUSE HE LET’S THIS KEEP HAPPENING

What a sorry piece of crap Joker biden is. He is clueless and being managed by the DEMONcrat party . This nation is going to be lost in the very near future.

I think we have reached the point where someone needs to turn Joe Biden off.

Who the hell told him that ? Don’t try that on us.

You know what is “mentally sick crazy, insane and just plain nuts about these 570,000 illegal army that has flooded our America between January 1, 2021 to April 30, 2021, every one of them is supported by massive America taxpayer dollars with massive American government benefits”!!! CHEATER Joe Biden is going to use them as massive illegal alien voters in the 2022 election to destroy us all as legal American voters by the millions!!! That includes you too Democratic voters!!!! All of us as American voters are their SUCKERS!!!!!!!

You voted for him…

Hidenbiden needs to be impeached for total incompetence, no one should be listening to anything , this lying,corrupt,racist,sexualperv,china,irainian,russsian,ukrainian,senile,frail,old,fool,puppet, says, he is mentally impaired and every one knows it. He has to go now.

The borders are to define thel limits of a country! all over the planet. This is OUR land, so yes, you scum you are a MORON!