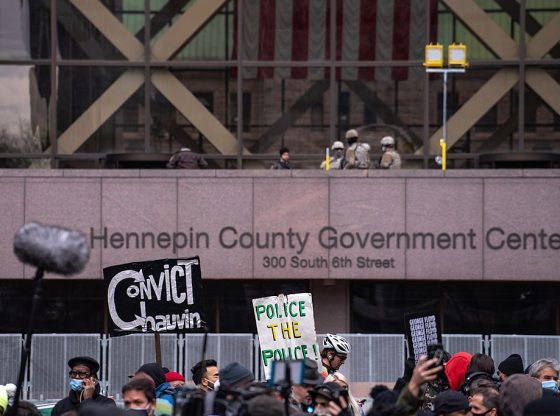 April 20, 2021 - Minneapolis -- A crowd gathers outside the Hennepin County Government Center after notice being given that a verdict in the Derek Chauvin murder trial would be read within 2 hours. Chauvin is charged in the May 25th, 2020 death of George Floyd. via Wikimedia Commons
| By: Sally Kent| Your America | 1790 | 7 comments
Advertisement
Trump's Fmr Senior Adviser Needs Your Help Defeating This RINO [ACT NOW]

Minnesota prosecutors in the Derek Chauvin case filed a memorandum requesting the court to deny the defense’s motion for a new trial.

The state wrote that Chauvin’s attorney’s claims that the former Minneapolis police officer should have been tried in another county outside of Hennepin – which includes Minneapolis, where George Floyd died during an arrest last year – were irrelevant because publicity of the murder was widespread.

The prosecutors noted that Floyd’s murder was recorded by a nearby bystander and quickly spread across the internet.

“As a result, the entire world soon became aware of what had transpired on the corner of East 38th Street and Chicago Avenue,” the state said. “There is no reason to believe that any part of this State was less impacted by pretrial publicity. Similarly, regardless of when this case was tried, it was always going to attract enormous attention. Under these circumstances, the law recognizes that changing venue or continuing the trial would not have had meaningfully lessened jurors’ exposure to pretrial publicity.”

Chauvin’s attorneys also claimed that the jury should have been sequestered and that one of the jurors didn’t reveal his bias and support for Black Lives Matter during jury selection, allegations the state said the court had already rejected, according to The Wall Street Journal.

Chauvin is set to be sentenced on June 25th.

Fentanyl>>9 times the amount of lethal toxicity
Had he been allowed to run, how many steps would he have made?

After 6 burglaries, 3 car thefts, 2 violent home invasions , 3 armed robberies, beating 4 victims senseless and passing counterfeit bills,, coke , alcohol, fentanyl meth addiction and 23 arrests since 1998, George Floyd was able to provide 27 million from the state and 20 million from go fund me for his family. Do you think they would give up 47 million to have have their beloved George back?

hell no the family will kill his sorry ass for a hell of less money than that.

You make a valid point. The trial had plenty of holes in it. The Supreme Court should be able to see through it. Chauvin was guilty but guilty of what? It was not premeditated murder. Chauvin is like 5 ft7, 140. Floyd was like 6 ft 3, 240.

Change of venue and a new trial certainly seem indicated.

If they were not scared of a new trials out come, they would say, “Lets do this.”